For the second day in a row, CNN's New Day let the newly-elected far-left Manhattan DA off the hook regarding his most radical soft-on-crime policies.

We blogged on Thursday about the show's segment on Alvin Bragg's policies. On Friday morning, co-host John Berman actually interviewed Bragg. And both times, the show focused on Bragg's relatively less controversial policies, while burying his most radical ones.

Bragg answered that people committing such crimes, rather than getting prosecuted, should get "services" instead, permitting the police to focus on more serious crimes.

But what Berman failed to confront Bragg with were his truly outrageous policies:

And Berman virtually apologized to Bragg for having even raised the fare evasion and banana theft issues, saying he only mentioned them "because these are the questions that are being asked this morning, I think, when people see the headlines." Berman later assured Bragg that "there's a lot more here than just the headlines." 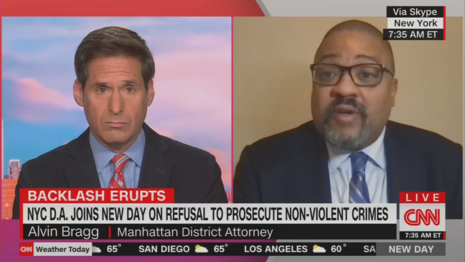 At the end of the segment, Berman asked Bragg to respond to John Podhoretz's column in the New York Post, "Alvin Bragg’s psychotic policies are a gift to the GOP," in which he suggested that the GOP send Bragg "a fruit basket." Bragg feigned ignorance, claiming, "I don't even know what that means."

Bragg will get the meaning when ads start to run in New York and across the country highlighting the kind of insane soft-on-crime policies that Bragg and other Democrats are pushing.

Note: Bragg gave a nonsensical answer to Berman's question about fare evasion. He said if people have an Easy Pass and go through a toll booth, they're not arrested, but simply are sent a letter, presumably with a fine. He said that fare evasion should be treated in the same way.

Of course, if people have an Easy Pass, they're not violating the law and wouldn't be receiving a letter. In any case, toll violators can be caught because a camera records their license plate, thus permitting their identification. How would a turnstile jumper be identified? Is Bragg proposing license plates for New York's straphangers?

District attorney Alvin Bragg joins me now. Thank you so much for being with us. Because I want to hear your explanations for these things. Fare evasion is when you don't pay to get on the subway. So my question for you is, if you're not going to prosecute fare evasion, why should I pay a subway fare?

ALVIN BRAGG: So, I was elected to deliver safety and justice for all. I've seen every side of the criminal justice system. What we're doing now is not working. Let me give you an example. I don't know if you're a driver, but if you have an Easy Pass and you go through the toll, they don't stop you and arrest you there. What they do is send you a summons, they send you a letter, they send you a ticket. That's what we need to do on fare evasion.

We need to be directing our prosecutorial resources to our uptick in gun violence.

BRAGG: Well, look. I don't want to personalize it as to you. But I am going to assume that you don't have a significant poverty issue, right? Many of these cases are not driven by someone who just wants the banana to flout the rules. They're driven by addiction, they're driven by mental-health issues, they're driven by poverty. So what we're gonna do, is link people to the services they need so that we can put an end. Get that person what they need so we can get them out of the system so we can focus on things like guns and sexual assaults.

BERMAN: Listen, I'm pressing you on this because these are the questions that are being asked this morning, I think, when people see the headlines on what you're doing here.

And I do want to note at the end there is a political element to this also. You had to run for office, you had to win an election to be in the job you're in right now. And John Podhoretz at the New York Post writes, "the Republican party needs to send Alvin Bragg a fruit basket." What do you say to that?

BRAGG: I don't even know what that means. What I do know is that an overwhelming majority of Manhattan, in the general election, voted for me. And we put out a detailed plan of what we were going to do, and we're now doing it!

BERMAN: I do appreciate your willingness to come on and discuss this. You certainly don't shy away from the discussion at all. And I think there's a lot more here than just the headlines.