What CNN did Thursday morning was a crime—against good journalism.

In a New Day segment discussing the soft-on-crime policies of the new Manhattan DA, CNN focused on the less controversial aspects of his policies, while failing to disclose the truly outrageous ones.

Thus, it was mentioned that DA  Alvin Bragg -- who was never quite identified as an elected Democrat -- has announced that crimes such as failure to pay traffic violation fines, marijuana misdemeanors, and prostitution would not be prosecuted.

But what CNN failed to disclose is, as the New York Post has detailed:

CNN correspondent Laura Jarrett [daughter of Obama consigliere Valerie Jarrett], went on defense. "Alvin Bragg, you might dismiss him as just another progressive prosecutor trying to make big changes in a city. He has come in, this is the progressive platform that he wanted. But he is backing up his ideas with data." But there again, there was deception. Defending Bragg's decision to eliminate cash bail and not seek pre-trial detention in most cases, Jarrett said that his data show that most people released before trial:

"Do not actually commit violent crimes while they are out on bail." 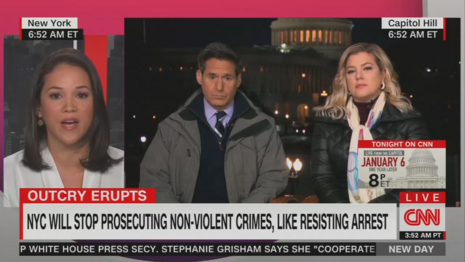 Here is an area where CNN is conveniently and completely forgetting the murderous Waukesha Christmas parade attack -- by a man out on bail. And CNN skipped that

Then note that weasel word: "violent." It sounds like many people released without bail before trial do commit crimes--but perhaps not of a violent nature.

And even there, Bragg has announced that he is including "resisting arrest" among the supposedly "non-violent" crimes [see screencap] that he won't prosecute.

And resisting arrest? Doesn't the crime's very name, "resisting" arrest, imply the use of force by the suspect? How'd you like to be a New York cop knowing that someone you're trying to arrest can resist with impunity?

CNN is sitting in front of the Capitol on January 6 making excuses for not prosecuting trespassing....which is the charge faced by many Capitol riot defendants, or the charge is "illegally parading and demonstrating in the Capitol." Would CNN endorse leniency there?

CNN's New Day failing to disclose the most egregious soft-on-crime policies of the new Manhattan DA was sponsored in part by GlaxoSmithKline, maker of Trelegy.

He says he believes that the decision will make the city safer and the criminal justice system more fair. However, he has been met by major backlash, as naysayers from the police union to Manhattan shopkeepers argue that the new policy is actually going to invite more crime. Let's talk about this now with CNN correspondent Laura Jarrett. Laura, just walk us through specifically the crimes that we're talking about that he is not going to be going after.

LAURA JARRETT: Yeah, guys, so it's interesting. Alvin Bragg, you might dismiss him as just another progressive prosecutor trying to make big changes in a city. He has come in, this is the progressive platform that he wanted. But he is backing up his ideas with data, and essentially trying to strike this balance between fairness in the criminal justice system on the one hand, and this need, this real concern, about public safety.

He's telling his prosecutors in his office, do not get bogged down with low-level, petty crimes. Because if you do, we cannot focus on the real serious violent crime that everybody really cares about. So let's take a look at what exactly he's telling his staff you do not prosecute any more. Things like marijuana misdemeanor offenses, failing to pay fines for traffic violations, most trespassing crimes—not talking about stalking—but lower-level trespassing, resisting arrest—that's an interesting one getting some pushback, and prostitution.

And I should also mention, he's taking on the bail system, telling his staff again, do not try to get pre-trial detention for people for low-level crimes; that's not where the focus should be. The police union, as you mentioned, a lot of pushback on this, essentially saying, why should we arrest people if they're just going to be back on the street? But Bragg is backing it up with data again, saying the vast majority of people who are out on bail do not go on to re-offend, do not actually commit violent crimes while they are out on bail. And if they are in jail for even three days, it has life-altering repercussions.