Maggie Haberman—a New York Times correspondent who doubles as a CNN analyst—suggested that it was brave of AOC to go an event filled with rich people wearing such a dress. Haberman claimed AOC's message was not "popular" with that crowd, and therefore that there was something "risky" in her wearing the dress.

CNN correspondent John Harwood claimed it was the "opposite of hobnobbing" and showed AOC's "talent."

To which we politely reply: baloney! The notion that a crowd of NYC elites was offended by the dress, and that it was brave of AOC to wear it, is absurd. Most in attendance were likely amused, and/or thrilled to have such a liberal celebrity in attendance! And of course she was hobnobbing! What better place to fish for big-time campaign donations than in a room filled with rich Manhattan elitists!? How many in attendance already were, or soon will be, on her donor list?

Note: per Wikipedia, Anna Wintour, Vogue editor-in-chief and a chairwoman of the Gala event, oversees both the benefit committee and the guest list, with Vogue staffers helping assemble the list of invitees. According to AOC: "NYC elected officials are regularly invited to and attend the Met due to our responsibilities in overseeing our city’s cultural institutions that serve the public. I was one of several in attendance.”

If AOC was given a free ticket worth $30,000, why wouldn't that constitute a gift or a donation by the Gala? 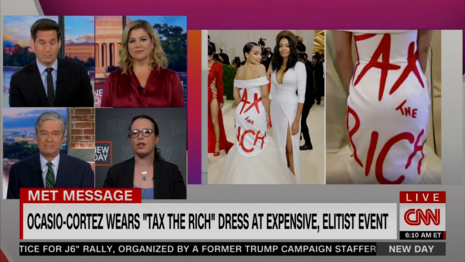 CNN defending Alexandria Ocasio-Cortez wearing a Tax the Rich dress to a $30,000-a-ticket Met Gala was sponsored in part by Pfizer, maker of  Preparation H, ADT, Tractor Supply, and Lexus.

BRIANNA KEILAR: Let's talk about Berman's favorite, which is the nexus of fashion and politics. Because Congresswoman Alexandria Ocasio-Cortez attended the Met Gala last night, and this may be the dress that is the most remembered from it.

On the back of this dress it says Tax The Rich. But this is also -- there she is standing next to the designer who is one of the few black designers who was featured at this event. This of course, Maggie, is one of the most expensive and elitist events of the year, and I wonder if you think she thread the needle here with her message and her presence there or not?

MAGGIE HABERMAN: I think she did. Look, I think there's going to be an effort by Republicans to say, look, I saw a lot of this last night, this is a gift to Republicans in the midterms. The midterms are not going to be decided on AOC's dress, first of all.

But second of all, I think it is unsurprising to see criticism that there she is hobnobbing with the wealthy. The message of that dress is not a popular message in that crowd. And so there is something risky about doing it. I think that she could continue to preach to people who already agree with her, or she could preach to people who don't, and she chose to do the latter.

JOHN HARWOOD: I would say it's the opposite of hobnobbing with the wealthy. And it shows the talent that AOC has. She has a strong belief system. She's able to articulate that belief system. We're now in this debate over the Biden economic agenda and Joe Manchin's out saying too big, too fast, too many taxes. And how do progressives counter that? And with AOC, you see she uses her star power to go into that venue, high-profile venue, and drive a very strong message that is now on the front page of newspapers, and we're talking about it on television

JOHN BERMAN: Look, I think if you want to argue whether or not taxing the rich is a good policy, that's fine. Have that argument. But to be outraged that she wore that dress to the Met Gala, and say it's somehow hypocritical, requires you to believe that Alexandria Ocasio-Cortez doesn't realize that the Met Gala has rich people who are hobnobbing behind closed doors.

KEILAR: [facetiously] You think she knows that?

KEILAR: We all know that.

HARWOOD: People who are outraged about it, that's how you know that they were stuck by the message. That it hit them. Because she drove something that they didn't want to be on the front page.