Obama Flack on MSNBC: Afghanistan 'Hasn’t Quite Worked Out As We Thought'

"It hasn’t quite worked out as we thought."

Shades of Hirohito's surrender speech in 1945:

“The war situation has developed not necessarily to Japan’s advantage.”

Stengel made a couple of other appalling statements. He said,

"What we’re seeing here is not an American tragedy, it is an Afghan tragedy."

And he dismissed the rapidity of the collapse as just an "optical problem." 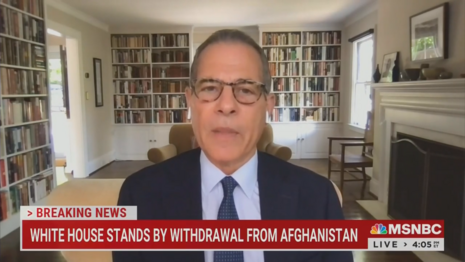 In contrast, former Obama Defense Department official Mark Jacobson said, "the actions of the administration right now are a bit shameful. And I only say that given what we’ve seen in the last 24 hours . . . The disassembling and the refusal to use words like abandonment and evacuation, and that is what it going on, says that [Biden admin] people are not comfortable with this decision."

Jacobson ominously compared the situation in Afghanistan to Rwanda--where in a 1994 genocide, 800,000 people were slaughtered in 100 days.

There was a stunning moment a bit later. As a fellow Obama admin alum, Jacobson said to Stengel, "It is hard for me to disagree with you."

Stengel interjected: "Everybody else does. I don’t know why it's hard for you." Jacobson laughed nervously in response, and when the camera cut back to Stengel, his bitter, tight-lipped expression was clearly visible.

Former Obama flack turned MSNBC analyst Rick Stengel, defending Biden on Afghanistan, saying "tt hasn’t quite worked out as we thought" was sponsored in part by Verizon and USAA.

NICOLLE WALLACE: Mark Jacobson is here. He's a combat veteran, he served in Aghanistan in 2006. He also served in Kabul as a deputy NATO representative, and was a senior adviser to [Obama] Defense Secretary Ash Carter . . . Mark, I start with you. Your reaction to what is unfolding.

MARK JACOBSON: It's really hard to find words. I said just the other day that my concern is that this is not just going to look like Syria but more like Rwanda.

I think the actions of the administration right now are a bit shameful. And I only say that given what we’ve seen in the last 24 hours. The president has owned this. And he made a decision that he views is the right one. But the dissembling and refusal to use words like abandonment and evacuation when that's exactly what it going on, says to me that people [in the Biden admin] aren't comfortable with this decision. I’m also very concerned about the speed at which the Taliban are retaking the country.

WALLACE: Let me show the president’s address to the nation just a few weeks ago on this topic, Rick Stengel.

JOE BIDEN: The Taliban is not the South, the North Vietnamese army. They’re not remotely comparable in terms of capability. There's going to be no circumstance where you see people being lifted off the roof of a embassy of the United States from Afghanistan. It is not at all comparable.

WALLACE: Do you stand by those words, Rick Stengel, and do you think President Biden does?

RICK STENGEL: I would agree with what he said . . What we’re seeing is a tragedy. But it's not an American tragedy. It's an Afghan tragedy. And after 20 years, we thought they would be able to defend themselves. We’ve spent hundreds of billions of dollars there. And it hasn’t quite worked out as we thought. If it's just the speed with which this is happening, then that's an optical problem.

JACOBSON: Rick, I think you’re missing something here. And it's really hard for me to disagree with you. But there are —

STENGEL: I think everybody else does. I don’t know why it's hard for you.