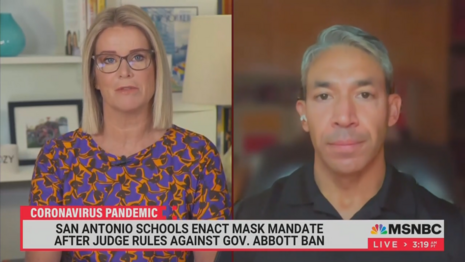 Many of us have witnessed suspiciously precocious kids at town halls asking the candidate a cutesy question that just so happens to jibe just so perfectly with the candidate's views. The suspicion naturally arises that Mom or Dad carefully coached their child in order to aid the candidate!

At one point, MSNBC contributor Katty Kay asked what the response from parents has been. Naturally, Nirenberg said that he has been "overwhelmed" by hearing from parents "in tears" of joy in response to the news of the court ruling. He added:

"I had someone tell me yesterday that their seven-year-old daughter cried when she heard the ruling because she felt like finally somebody was caring about them and their health."

Seriously? A seven-year-old crying tears of joy in response to the granting of a temporary restraining order? Any word on the seven-year-old's view on the potential issuance of a writ of mandamus? At least this is just the mayor learning of an account of a parent. No actual videotaped performance was required. This is assumed to be great evidence of a popular pro-mask uprising.

Predictably, neither Katty Kay nor any other member of the Morning Joe crew followed up or expressed skepticism about Nirenberg's babes-in-tears story.

In any case, expect a recruiting war to break out among top law schools to enroll a seven-year-old already so moved by the issuance of a TRO!

PS: between the parents the child in tears over the TRO, looks like a lot of lachrymose folks in Ol' San Antone. They used to build 'em tough in Texas!

Note: Although Nirenberg ran and serves as an "independent," he is very much of the left side of the political spectrum. It was Nirenberg, for example, who led the charge to get Chick-fil-A banned from the San Antonio airport. Nirenberg and the city were eventually forced to back down under an agreement with the FAA.

But in an ultimate twist, Chick-fil-A announced it wouldn't open a location at the airport. Presumably, they didn't want to go where they weren't welcome—at least by liberals in city government. Avid Chick-fil-A fans were surely disappointed by the news.

Texas Mayor Ron Nirenberg on Morning Joe, claiming that he'd been told that a seven-year-old cried tears of joy when told of the issuance of a temporary restraining order permitting the issuance of mask mandates, was sponsored in part by Allstate and Sleep Number.

JOE SCARBOROUGH: Katty Kay is with us and has a question, Mr. Mayor.

KATTY KAY: Mayor, we’ve seen around the country isolated incidents of medical professionals getting harassed by parent communities when they tried to propose mask mandates for schools. Do you have a sense in San Antonio, when you speak to parents of children in the community, how they feel? Do you, could you give us a kind of broad sense of whether, where parents in your community stand? Are they in favor of mandating masks, or do they have some ambivalence about it?

NIRENBERG: I have been overwhelmed, and so have my colleagues, by messages, by calls, by visits from parents, in tears after we had the court ruling granting our temporary restraining order, which then allowed us to put in the mask mandate.

In tears, because they finally felt safe sending their children to school. I had someone tell me yesterday that their seven-year-old daughter cried because, when she heard the ruling she felt like finally somebody was caring about them and their health.

So, the overwhelming majority of response has been approval for mask mandates.