Scarborough To Trump Supporters: Get The Hell Out of US, Be Replaced By Immigrants

Tucker Carlson has taken heavy heat from the left for saying that Democrats want to replace the current electorate with immigrants.

And who would take the place of those exiled Trump supporters? Joe had the answer: "millions of immigrants who will come here."  According to Scarborough, those immigrants will "salute the flag and, most importantly, they will fight for what that flag represents."

Joe forget to mention what, "most importantly," the majority of those immigrants will do: vote Democrat! 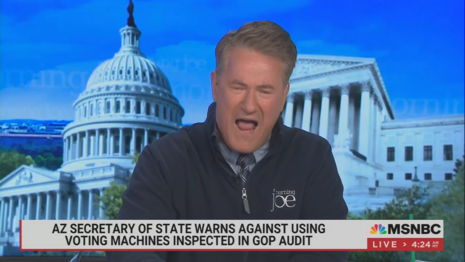 Joe Scarborough telling Trump supporters skeptical about the election results to "get the hell out" of America and be replaced by immigrants was sponsored in part by Liberty Mutual, Kayak, Lexus, and Comcast.

If you believe that, I will say to you what many of you said in the 1960s. [Begins screaming] America, love it or leave it! If you don't have respect in American democracy anymore, if you don't respect Madisonian checks and balances, if your guy doesn't win, if that's the new rules of engagement for this great republic, then just leave our country! Because you're unworthy of it!

And there are millions of immigrants who will come here and raise their right hand, and buy into the creed, and believe that we are exceptional! That believe American democracy is the greatest government on the face of the Earth! And they will do it proudly! They will salute the flag proudly! And most importantly, they will fight for what that flag represents!

While you shame yourself. While you disgrace yourself. While you disgrace our country in the eyes of the world. Yes, this is all on you. Get the facts. Live in the light. Follow the truth. And love this country! And stop this. Or leave. Or leave. If you're going to believe a reality TV show host's lies about the American republic, his
desecration of American exceptionalism. Then just get the hell out. We don't want you here. That's all I've got to say.

MIKA BRZEZINSKI: You couldn't have said it better, actually.

MIKA: No. I really appreciate that.

SCARBOROUGH: I appreciate it