MSNBC Radical Tiffany Cross on Law Enforcement: 'Time to Burn It Down'

Radical MSNBC host Tiffany Cross on Saturday appeared to advocate mass violence as a reaction to the American law enforcement system. Talking to a panel, she ranted, "It feels like it's just time to burn it down." Cross reinforced her implicit call to violence moments later, saying: "I have to say, as a people, for my people, I am up for the most radical of things to make sure that we live."

Cross was reacting to recently-released video of the death of Ronald Greene while in law enforcement custody in Louisiana. 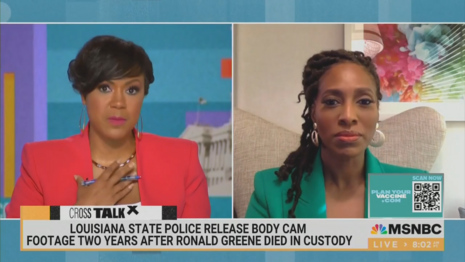 What if people take Cross at her word regarding law enforcement and "burn it down," and do "the most radical of things"? Following the death of George Floyd, America suffered through months of rioters "burning it down." Their targets included multiple police stations. So there was nothing ambiguous about Cross's message. This sounded like a literal call to reignite the flames.

Would Cross be prosecuted for inciting violence? Will the MSNBC suits can Cross, or make even the slightest suggestion that she tone down her potentially deadly provocation? Don't bet on it.

MSNBC's Tiffany Cross saying of the law enforcement system, "it's just time to burn it down," and that she is "up for the most radical of things" was sponsored in part by Allegra and Procter & Gamble, maker of Bounce. Click on the links to let them know what you think.

TIFFANY CROSS:  I am outraged, and exhausted, and angry. That video is practically unwatchable. And I think about that man’s family, and his mother, and what they must be going through.

And I just wonder—this is clearly not a system that can be reformed, and I just — what can we do to stop this? Because it feels like it’s just time to, to burn it down, you know? We ask, please stop killing us. It hasn’t happened. At this point it’s a demand and it’s still happening.

I am, I don’t even know the words to describe the level of outrage I feel thinking about what this man’s — his mother had to watch that tape. You’ve organized all over the country. I am so ready for this fight. I am so ready for this fight, because I don’t want to see another person go through that. How do we organize ourselves out of this quagmire? They’re attacking our voting rights. They’re attacking our lives and livelihoods. They’re killing us if they’re not overcriminalizing us and putting us in jail. As a longtime organizer what is it that we do?

Because I have to say, as a people, for my people, I am up for the most radical of things to make sure that we live.