Scarborough: I'm on Same Side With Sharpton, Warren, Bernie—Liberal Democracy!

Joe Scarborough's got one thing right: Al Sharpton, Bernie Sanders, and Elizabeth Warren are all on the liberal side!

On today's Morning Joe, Scarborough went all kumbaya with the left, depicting them as fellow warriors for democracy. It began, in the context of oh-so-eminent Liz Cheney's imminent ouster from House GOP leadership, with Joe claiming that he and others are in a battle for liberal democracy with Liz Cheney. The Reverend Al Sharpton managed to keep a straight face while unleashing this side-splitter:

"Absolutely. We’re on the side of democracy, and truth!"

Tell that to people wrongly accused by Tawana Brawley. Scarborough circled back to that theme later in the show, expanding his platoon of warriors for liberal democracy to include some of the most extreme elements in the Democrat party: 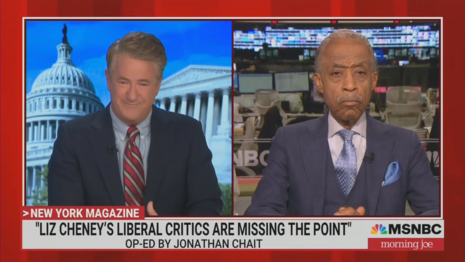 It's ridiculous that Scarborough could lecture about how people refused to accept valid election results when they spent the Trump years insisting that his ascent to power was a vicious Russian plot against democracy...enabled by "Moscow Mitch" McConnell.

It's also tough to swallow the notion that the likes of Sanders and Warren—who would so greatly expand government's reach while concomitantly shrinking individual freedom—are on the side of liberal "democracy."

Politics can make strange bedfellows—but this was a Posturepedic too far!

Joe Scarborough claiming he, Al Sharpton, Bernie Sanders and Elizabeth Warren are all supporters of "liberal democracy" was sponsored in part by Amazon, Lincoln, and Liberty Mutual.

AL SHARPTON: Absolutely. We’re on the side of democracy, and truth!

SCARBOROUGH: People, like on Twitter, when I will say something conservative idealogically about the budgets being too big, or talk about how we need to toughen things up at the southern border. They're all: "oh! You’re just the same as you’ve always been! I thought that [angry roaring sound.]"