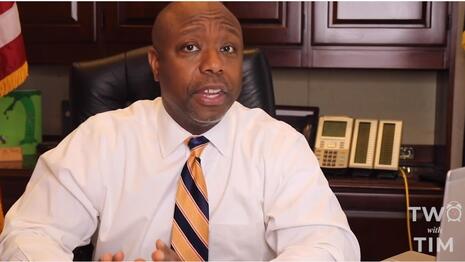 If there's one thing Democrats—black Democrats in particular—can't stand, it's an African-American who dares to be a Republican or conservative. Over the years, we've seen the abuse—at times flagrantly racist in nature—heaped on Clarence Thomas and Condoleeza Rice. And MSNBC's Joy Reid outrageously ridiculed Supreme Court Justice Clarence Thomas as "Uncle Clarence."

On her MSNBC show Saturday morning, Tiffany Cross repeatedly tore into Scott, branding his response to President Biden's address to Congress, and in particular, Scott's comments on the Georgia election law, as "bizarre, ridiculous . . . and asinine."

Even more insulting, MSNBC political analyst Fernand Amandi mocked Scott as a marionette, saying, "you can almost see the strings being pulled behind Senator Scott." Imagine the liberal outrage if a Republican suggested that an African-American couldn't think and speak for himself.

Cross also asked Rep. Hakeem Jeffries, an African-American Democrat from New York, whether after Scott's remarks, "was there any, 'c'mon, bra,' between you guys?"

In fact, Scott's comments on the Georgia election law were accurate. As Heritage Action has pointed out, the Georgia law: 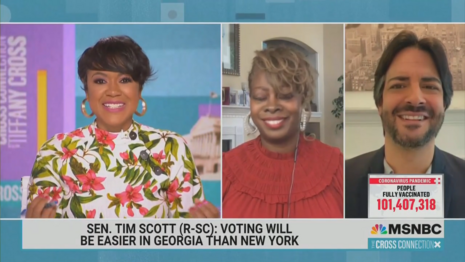 And the New York Post makes the case that Scott was also right when he said voting in Georgia under the new law will be easier than in Democrat-run New York.

MSNBC attacking African-American Republican Senator Tim Scott of South Carolina as a marionette who made "asinine" remarks about the Georgia election law was sponsored in part by Gold Bond, and Uber.

TIFFANY CROSS: Good morning, I'm Tiffany Cross, and we have a jam-packed Cross Connection as we talk voting rights, that bizarre rebuttal by Tim Scott, and Vice-president Harris's historic 100 days.

[Addressing Democrat Rep. Hakeem Jeffries] I'm curious what your relationship is like with Tim Scott. Did you talk with him after that really bizarre GOP response? Was there any, "c'mon, bra," between you guys?

[Addressing Fernand Amandi] I want to play a clip from Senator Tim Scott and his completely asinine remarks that he made on the voting law in Georgia. Take a listen.

TIM SCOTT: Republicans support making it easier to vote and harder to cheat. The State of Georgia passed a law that expands early voting, preserves no-excuse mail-in voting and despite what the president claimed, did not reduce election day hours. If you actually read this law, it’s mainstream. It will be easier to vote early in Georgia than in Democrat-run New York.

CROSS: [laughing] Fernand, I’m just at a loss. I mean, what do you make of those ridiculous comments?

FERNAND AMANDI: Well, you can almost see the strings being pulled behind Senator Scott as he is articulating the very Orwellian talking points that he says where black means white and up means down and left means right. I mean, it is obviously absurd on the face of it, and I don’t even know why we continue to give any credence to the Republican party on the subject matter when they’ve proven over and over again that their mission is to do the exact opposite. It’s to make voting harder, and it’s to make access to the vote much more difficult for everyday Americans, particularly if you are an American of color.