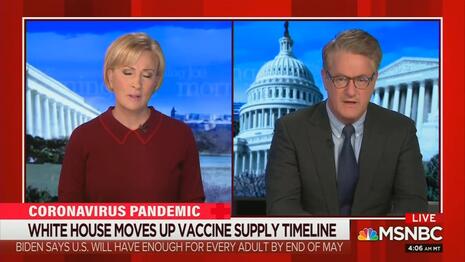 CNN and MSNBC spent most of 2020 raining fire on Team Trump's incompetence on COVID. They even rained fire on the idea that vaccines could be ready before the end of 2020. Ooooops.

Now they can barely stand the idea that Operation Warp Speed lived up to its name, as exemplified by Mika Brzezinski on today's Morning Joe.

Mika gushed ["wow, wow, incredible"] over President Biden's announcement that by the end of May there'd be enough coronavirus vaccine for all adults in the U.S. She proclaimed "Joe, it's night and day, this administration compared to the last." Scarborough agreed: Well, it certainly is in terms of logistics." But then he had the honesty to mention:

"The Trump administration did implement Operation Warp Speed. We moved towards a vaccine with extraordinary speed."

But no sooner had the words "Warp Speed" left Joe's lips, than Mika responded with a disgusted "ugh" and eye roll. Brzezinski did stop short of waving a string of garlic bulbs to ward off the evil orange spirit.

Making amends for his praise of Trump's Warp Speed, Scarborough doubled down on Trump's "horrific" logistics on the vaccine, while praising the Biden administration in that regard. Um, how does Dr. Fauci fit in here? He was incompetent then, and a superhero now?

Mika would surely have been happier with CNN's handling of the matter. After spending 2020 in a perpetual "doom scroll" of terrible and even more terrible news on the handling of coronavirus, New Day co-host John Berman hailed Biden's announcement like he had parted the Red Sea of COVID.

BERMAN: After all we’ve been through the last year, it really would be a miracle. And now it may be! And a lot sooner than thought!....If it all happens as planned, it really will be a remarkable achievement!

Notably, there was not a word about The Operation Whose Name Must Not Be Mentioned. Dare we say it? Warp Speed!

MIKA BRZEZINSKI: President Joe Biden announced yesterday that the U.S. will have enough Covid vaccine for every adult by the end of May: two months earlier than expected.

JOE BIDEN: We're now on track to have enough vaccine supply for every adult in America by the end of May.

MIKA: Wow. Wow. The White House also officially announced the news that broke at the end of our show yesterday that the administration is using its powers under the Defense Production Act to help drug maker Merck produce Johnson & Johnson's newly approved one-shot vaccine.

JOE SCARBOROUGH: Well, it certainly is in terms of logistics.

They understood that and immediately started working quickly. And Claire McCaskill, because of Operation Warp Speed in the last administration and because of Joe Biden's team actually being filled with professionals, people who understand logistics and more interested in performance than just gestures, they're going to get these vaccines out to every single American by the end of May. That's remarkable --

SCARBOROUGH: And means, you know what? We may just have something approaching a normal summer.