Despicable! MSNBC, CNN Give Rush the Soviet Treatment, Black Out Morning News of His Death 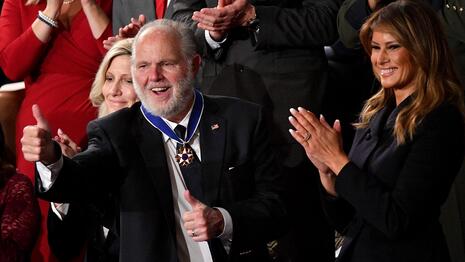 Love Rush Limbaugh or hate him, it is undeniable that he was a huge, transformative media figure. If there was ever a more impactful conservative media voice in the last 30 years, who would it be?

As just two examples of how Rush's importance spanned decades, consider that over a quarter-century ago, Republicans saluted Rush as the "majority maker" and made him an honorary member of the House. Republicans credited Rush for helping them win back the majority after decades in the wilderness. And it can rightly be said that Rush was instrumental in the success of Donald Trump's 2016 presidential run.

So Rush's death is, indisputably, a tremendously newsworthy event—his life and legacy eminently deserving of discussion.

And yet, incredibly, despicably, during their combined six hours of airtime this morning, neither MSNBC's Morning Joe nor CNN's New Day devoted a single moment to a discussion of Rush's passing. On New Day, the blackout was absolute. The word "Rush" never crossed the lips of any of the hosts, reporters, or guests.

The closest Morning Joe came was to mention that President Trump mentioned Rush's passing when appearing yesterday on a number of TV shows. But as for Scarborough and company themselves actually discussing Rush? Not a word.

CNN somehow found time to air a segment on Serena Williams' future prospects after her semifinal defeat at the Australian Open. I'm a big tennis fan, but how newsworthy is that compared to the passing of Rush?

MSNBC and CNN's failure to discuss Rush was pure media malpractice. It was also the liberal media's ultimate insult. Discussing Rush, if even to criticize him, would at least have acknowledged his importance. Instead, MSNBC and CNN opted for the Soviet treatment, airbrushing him from history.

Meanwhile, a CNN writer just celebrated pornographer Larry Flynt on Saturday because he "never relented in championing the American values of free press, speech and expression."

The liberal media might try to forget Rush, and do their contemptible best to ignore him. But those in the conservative movement, and the countless millions of his devoted listeners, will remember Rush forever. RIP Rush Limbaugh.