On Riots, Scarborough Sneers at 'Taco Stands' and 'Idiots, Jackass' on Other Cable Channels

Joe Scarborough started with a sensible position: property damage during last summer's "racial reckoning" riots was not as significant as the breach of the Capitol, the center of American democracy.

But of all ways to try to make his point, Scarborough foolishly chose to demean the importance of . . . taco stands?! He also worked in a transparent swipe at Fox News, engaging in a condescending attempt to school what he referred to as "idiots" and a "jackass" at "other cable-news channels."

"I know there are idiots on other cable news channels that will say, well, this mom-and-pop store was vandalized during the summer riots, and that's just as bad as the United States Capitol being vandalized.

No. No, actually, no. No, jackass, it's not. The Capitol of the United States of America is the center of American democracy. And while I am a fierce believer in people's right to defend their private property, I'm not going to confuse a taco stand with the United States Capitol. I'm not going to confuse the selling of tacos with actually moving through a constitutional process that is laid out in the United States Constitution for members of the House and the Senate to actually perform their constitutional duties. No. No. No. Property damage does not equal insurrection." 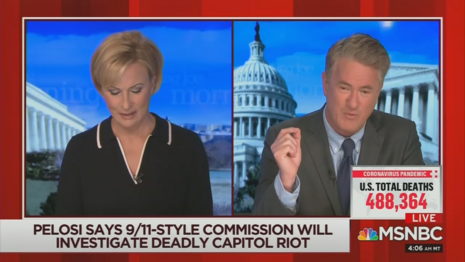 Scarborough's wife and co-host Mika Brzezinski looked—yet again—manifestly embarrassed by her husband's vulgar excess. As you'll see in the screencap, a mortified Mika bowed her head as Scarborough directly addressed himself to the imaginary "jackass" on another cable-news channel.

And of all things to go after and demean: a taco stand? Imagine if a conservative had said that. Cries of "anti-Latinx bigotry!" would ring through the land!

Scarborough could just go to NBCNews.com to see stories of last summer's riot-damaged taco restaurants, like Seoul Taco in Chicago. Owner David Choi expressed a need for racial justice, but "Every day the restaurant is closed, for example, translates to more lost wages for his 20 employees, many of whom are black or Latino."

If you own a small business destroyed in a riot, Scarborough thinks that's just a cheap Fox talking point. Back in July, 2020, as the riots in the wake of the death of George Floyd were raging across the country, Scarborough wrote a Washington Post column claiming that, in contrast with people like himself, "millions of Americans" can't aspire to the American dream. He didn't utter a word of criticism of the riots. To the contrary, a week later he actually spoke of the riots being "peaceful . . . for the most part." Mostly peaceful like this, Joe?

Joe Scarborough demeaning tacos stands in contrast with the Capitol, and swiping at "idiots" and a "jackass" at "other cable-news channels," was sponsored in part by ADT, Sleep Number, and Xfinity.