On the heels of her buddy Steve Schmidt joining the Democrat party, Nicolle Wallace apparently decided today to expose the depths of her seething disdain for conservatives.

Wallace did so in the context of claiming that Mitch McConnell didn't like working with President Trump, but was pleased to be able to "put whatever judges [sic, Justices] he wanted on the United States Supreme Court." As Wallace imagined the conversation, McConnell could just call the president and say:

"Hey, do Gorsuch, do Kavanaugh next. And let’s do a Hail Mary with the real right-wing lunatic."

This comes after Barrett publicly expressed skepticism on the Trump administration's plans to exclude illegal immigrants from the Census for the counting of congressional districts.

Have a look, courtesy the National Review, at Barrett's absolutely superlative record as a student, professor, and lawyer. On a personal level, she is the mother of seven children, including one with Down syndrome and two adopted from Haiti. But Wallace can take a swipe at her Catholic faith by calling her nomination a "Hail Mary." 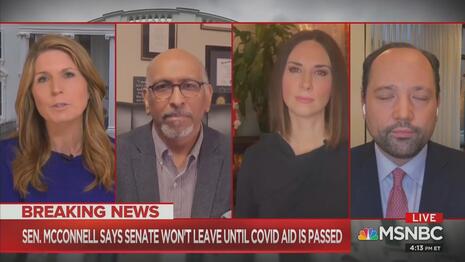 For Wallace to slur this eminently qualified, brilliant, decent, caring human being as a "right-wing lunatic" is so far beneath contempt as to beggar description.

Ironically, Wallace uttered her contemptible words just after saying that:

"Republicans are afraid that we might reintroduce shame into the political ecosystem."

Nicolle Wallace is the epitome of shamelessness in the service of her ugly, twisted, politics. She is an utter disgrace.

Nicolle Wallace's slur of Amy Coney Barrett as a "right-wing lunatic" was sponsored in part by Progressive and Humira. Contact them at the Conservatives Fight Back links to let them know what you think of their sponsorship of Wallace's contemptible slur.

NICOLLE WALLACE: But Republicans don't feel pressure because of the suffering, because people have been suffering for many, many, many months. Republicans are afraid that we might reintroduce shame into the political ecosystem.

And I think that, what I detect in McConnell, is relief. I don't think McConnell liked working with Donald Trump. I think he was craven enough to know that he could put whatever judges he wanted on the United States Supreme Court.

Just call him up again and say: "Hey, do Gorsuch, do Kavanaugh next. And let's do a Hail Mary with the real right-wing lunatic."