Is low energy contagious? Because in the big moment of her acceptance speech at the DNC last night, Kamala Harris was stricken by the same paucity of pizzazz that characterizes Ol' Joe.

Simply put, Kamala Harris laid an egg. Of course the liberal media can't, or won't admit that. But it was what the MSM didn't say that gives away the game.

Take Morning Joe. You know that if there was something—anything!—that Mika Brzezinski could have found to praise in the speech, she would have spent much of the opening segment gushing over it. Instead, amazingly, Mika uttered not a word of commendation for Kamala's effort.

Instead, Mika handed off this sorry omelet to Willie Geist. Poor Willie ducked the duty. He promptly turned to Quibi's Shawna Thomas, an NBC News alumna, saying, "I'll let you dig into Kamala Harris's effectiveness." Better you than me, Shawna!

About the best Thomas could come up with was to say that Harris "did an admirable job of reintroducing herself" in terms of identity politics. Talk about damning with faint praise! Meh with a capital 'M'!

As soon as Thomas finished, a strikingly subdued Mika moved rapidly away from the Harris debacle, ending discussion of the speech by saying "let's get right to the unprecedented performance by Barack Obama last night." 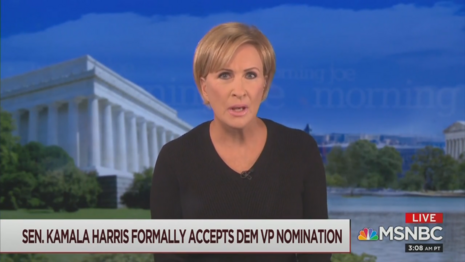 Given Harris's reputation for toughness, as proven by the way she put the shiv into Joe Biden during that primary debate, this NewsBuster was bracing for Kamala to deliver a stinging speech last night. Instead, I found myself thinking something that columnist Debra Saunders subsequently wrote: Her meandering speech sounded like it was written "by a committee."

Makes you wonder what Biden, waiting in the wings, was thinking. He assumed he'd chosen a warrior. And perhaps Harris will eventually fulfill that role. But what Biden, and the rest of America, saw last night was someone unable to deliver a punch.

KAMALA HARRIS: Joe and I believe that we can build that beloved community. One that is strong and decent, just and kind. One in which we can all see ourselves.

WILLIE GEIST: Shawna Thomas, I’ll let you dig into Kamala Harris’s effectiveness, prosecuting the case against Donald Trump which she began to do for the first time as the nominee last night.

MIKA BRZEZINSKI: We’re going to have a lot more on this, what Kamala Harris brings to the table, her leadership, her ability to fight. But let’s get right to the unprecedented performance by Barack Obama last night, who assailed President Trump in his Democratic convention speech.