Joy Reid might be gone from her weekend-morning MSNBC show, but the rude, insulting treatment of Republican guests for which Reid was infamous has remained with Tiffany Cross filling the role on Saturday (and her second time hosting since the announcement of Reid's return to weekdays).

After a combative, lengthy interview doubling as a condescending dismissal of those who aren't on board with the radical left, Cross concluded asked National Diversity Coalition for Trump executive director Bruce LeVell: "Has Donald Trump has ever promised you anything financially in exchange for your blind support of his administration, or helping his campaign?"

That's tantamount to suggesting that Trump might have bribed LeVell. Not only was it insulting to both Trump and LeVell, it insulted all African-Americans, implying that they cannot think for themselves, and that anyone who strays from groupthink must be doing so out of corrupt reasons.

LeVell answered Cross with a flat "no." He detailed that what President Trump did promise, and deliver, to African-Americans was a reduction in black unemployment, and the creation of generational wealth in black communities. 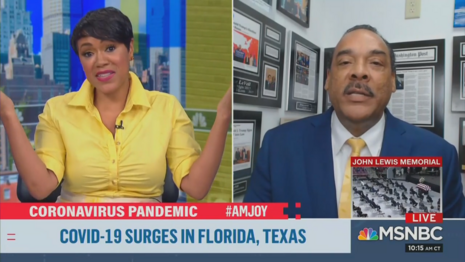 Earlier, when LeVell spoke of the "China virus," Cross interrupted to say she wanted to "correct" him.

Naturally, it was an echo of the way Reid would reprimand, and even shut down, Republican guests whose lingo didn't conform with Reid's tastes, as here and here, here, and here.

Cross told LeVell that the use of the term "China virus" was "racist" and was offensive to not only Asian-Americans, but Cross herself. When LeVell twice asked her where the virus came from, she refused to answer. Instead, she snidely told him he could ask the questions if MSNBC chose him to host the show someday.

Cross's attack on the Trump supporter's integrity was sponsored by Verizon. Follow the link to our Conservatives Fight Back page to contact Verizon to let them know what their advertising dollars supported.

BRUCE LEVELL: The President of the United States, Donald J. Trump, and we as the country, Tiffany, have done a marvelous job and a wonderful job combatting this China virus that has taken over our economy ---

TIFFANY CROSS: So, I just want to correct you.

CROSS: I -- I don't know. You lead the diversity coalition and you’re --- you're calling — you’re using these racist terms like the China virus —

LEVELL: It came from China.

LEVELL: That's where it came from.

LEVELL: That's where it came from.

CROSS: --- that you had the MAGA virus than I would call this the China virus.

CROSS: That’s ridiculous and you know that.

CROSS: And somebody leading the diversity coalition ---

LEVELL: --- you want to talk about facts?

CROSS: --- this community, it seems like an easy thing to not do that,

CROSS: --- as the head of the diversity coalition.

CROSS: --- has a lot of people in rotation to host this show, when you get in rotation, you can ask the questions. But right now, I'm asking them and I'm saying a lot of people in the Asian-American community, and myself included, find that term offensive. Why not call it COVID-19 --- what scientists call it? And that's beside the point. I don't want to get sidetracked. The point is there are 146,000 dead Americans. This --- we're seeing 50,000 new cases a day and you have gone on record by saying [LAUGHS] you think the President has done a good job and you don't think there's anything different he could do?

CROSS: --- can't have a factual discussion ---that we can't have an intellectual exchange.

LEVELL: But you can't sit here and laugh about this. You can't ---

LEVELL: --- laugh on national TV about people who are ---

CROSS: --- this is my last question, because we’re running out of time.

CROSS: But I am curious, because when I see folks like you support this President.

LEVELL: No and I’ve known him since 2015. I know what he has promised. He promised that he wanted to get the black unemployment low, get it down. He wanted to create jobs. He wanted to bring back and resurrect generational wealth in black communities....