When it comes to going out in public given the coronavirus, how can you distinguish between a dangerous "super-spreader," and someone showing "extraordinary courage?"

Simple! Fans of President Trump are the dangerous super-spreaders. But oh-so-progressive protesters thronging the streets are showing "extraordinary courage!"

That was the deplorable double-standard on display on Ali Velshi's MSNBC show this morning.  Discussing President Trump's Tulsa rally of yesterday, Velshi lamented:

"The event also raising red flags for its potential as a coronavirus super-spreader."

But mere minutes later, Princeton professor Imani Perry hailed the protesters' bravery in the face of the virus:

"I think there's something, kind of extraordinary courage we need to acknowledge amongst protesters given the existence of the virus."

Perry did provide some vexing remarks, claiming that this moment in history has "allowed people to think in serious contemplative ways about the depth of American inequality." Is this moment defined by "mostly peaceful" protests, or are we moved "in serious contemplative ways" by looting, burning buildings to the ground, and tearing down public property?

And in a line that brought a smile to her lips, Perry described President Trump as "championing everything that is vile and white supremacist."

Velshi and guests also relentlessly reveled in the smaller-than-expected crowd at the Tulsa rally. Joe Biden's campaign isn't even trying to fill a faculty lounge!

Somehow, Velshi skipped Trump seemingly singling him out last night as that guy with the shaved head who stood in front of a raging fire in Minneapolis and denied the protests were "unruly." The president didn't say his name, and suggested this happened on CNN.

ALI VELSHI: The [Tulsa rally] event also raising red flags as a potential coronavirus super-spreader. This as six Trump campaign members who were in Tulsa ahead of the rally tested positive for coronavirus. That includes at least two members of the Secret Service. 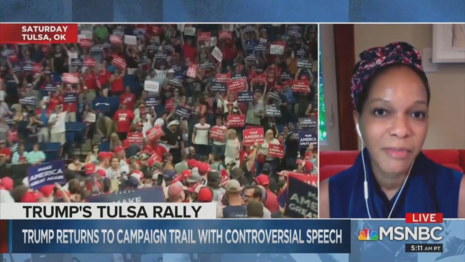 IMANI PERRY: I do think that there's something about this moment in history, and the kind of reckoning that it is demanding of all of us, even though African-Americans are disproportionately experiencing the greatest costs of COVID-19. But there’s something that I think, being inside and being reflective, allowed people to think in serious contemplative ways about the depth of American inequality. And so there’s an opportunity to this moment.

I think there’s something, a kind of extraordinary courage, that we need to acknowledge amongst protesters, given the existence of the virus. And I think that to see that on the one hand and on the other hand, the part of that small crowd for the Trump rally is also probably also reflective that even his most ardent supporters are not entirely convinced of his fictitious account of the world. Were not willing to risk themselves to go out and participate in his championing of sort of everything vile and white supremacist.