The freakout continues at President Trump's Fox News town hall on Sunday night at the Lincoln Memorial. On today's Morning Joe, Donny Deutsch called Trump a "cornered animal" and warned he will do "really, really, really bizarre things." He didn't explain what that would be.

Macho man Donny salted his spiel with multiple snipes at the president's manliness, referring to him as "impotent," a "little man," and "scared and pathetic."

DONNY DEUTSCH: What an impotent display by a little man. Desperately trying to look presidential. Because he’s been behaving anything but. You would think that every day, he gets to stand up in front of experts in a world crisis, no better opportunity to look presidential. But we kind of see, obviously, the emperor has no clothes there.

And to me, it was one more vulgar exploitation, one more reaching into his bag of tricks. And it was so pathetic and, to me, I want people to really, really be sensitized and understand what’s coming.

We see a cornered animal right now. I'm not calling the president — it's a metaphor, of course. I don’t want my Twitter to explode. He's going to start to do some really, really, really bizarre things.

Macho Donny's afraid of a few mean tweets? How many times have we seen these people on MSNBC and CNN peer into the future and say Trump is toast, Trump is boxed in, the walls are closing in? But Donny pretends this has never been said before. Oh, now, he's uniquely endangered, for the first time: 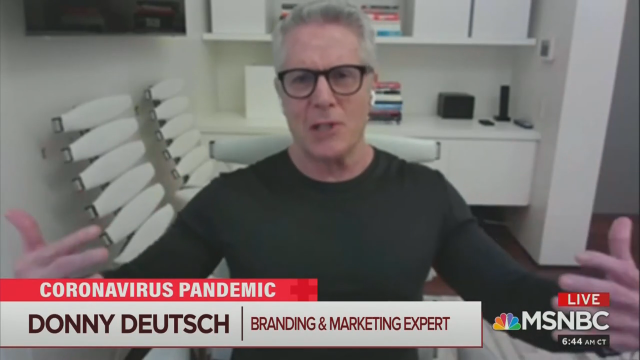 DEUTSCH: He’s never been in this position in his life, and he's boxed in. He doesn’t have a move at this point. He’s — he has already made his bed. And that, to me, is a metaphor. What he did, standing in front of -- sitting in front of the Lincoln Memorial, looking like the little man he is. Oh, and by the way, he says he's been treated worse by [sic] Lincoln. I think Lincoln was shot, so I think we can kind of put that one aside.

But you're going to see some more magician trickery that doesn't work. When there's no substance, when there's no steak, all you can do is sizzle. When the American people, when people are dying, when 70,000 people are dying, sizzle doesn’t cut it! And that's all this guy has, is sizzle. There ain’t no steak there! You can sit in front of any monument you want. People see what they see now -- a scared, pathetic, incompetent president.