Unless a heretofore hidden tape turns up, we'll never know for sure who is lying about the 2018 meeting between Bernie Sanders and Elizabeth Warren in which she alleges he told her a woman couldn't beat President Trump.

But consider this: who's been sinking in the polls and needed to shake things up? Who leaked the alleged conversation to the media? And above all, who has an established reputation as a serial dissimulator on everything from being a Native American, to getting fired because she was pregnant, to sending her kids to public school? I mean, her nickname is Lieawatha, for gosh sakes!

But Joy Reid had a different line to peddle on her MSNBC show today. She assembled an all-woman panel from which nary a kind word was heard about Bernie. And the unkindest cuts came from  "body-language expert" Janine Driver who said she thinks Warren was "telling the truth," and that "Bernie's lying."

According to Driver, a big "tell" as to Sanders supposed lying was that Bernie was "turtle" slouching during his post-debate encounter with Warren. Janine: the guy's 78, and he's just had a heart attack -- so he slouches?!

Reid left no doubt that she sympathized with Driver's take, saying that Sanders has a "physicality" about him that makes it "plausible" to think he lied.  Joy: doesn't Warren's history of a wayward way with the truth make it plausible that she was the one lying here?

JOY REID: Also joining me, Janine Driver, a body-language expert . . . I’m going to start with you, Janine. Because I know you do a lot of public speaking that has to do with kind of women operating in the work place. 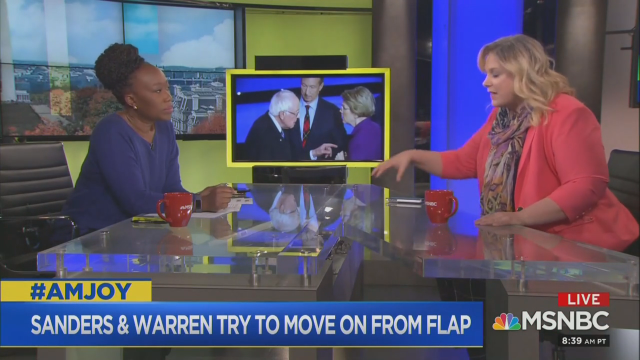 REID: And when I saw the both on — during the debate--Warren was quite cool about it, she’s like, Bernie is my friend I’m not getting into that here. But then afterwa!. That felt to me like a lot of the ways that women have to operate and work in the professional environment, where you can't be angry or you're the bad girl.

DRIVER: Most of us want to deal with it afterward instead of just going right for it. The fact that Elizabeth Warren not only came over, she squared her body, he's giving her the cold shoulder, he doesn't turn to her. She said, I think you just called me a liar on national TV. If you go back to Weinergate, you go back to all of these political armageddons when it comes to deception, no one calls someone else a liar like this. And she comes right out says, wait a minute: did you just call me a liar. This is indicative of someone who's telling the truth. Because if she was lying, it’s unlikely she would have confronted him in that moment.

REID: Janine, the thing about the — this dust-up between the two of them, is that scandals hurt you more when they seem plausible, right? I mean, Bernie Sanders does have a sort of physicality, you know, when he talks. A shaking your finger at Hillary Clinton, shaking your finger, shove-y weird-y. His physicality makes me think, yeah, he could of said, listen, I think in this environment a woman can't win. It doesn't seem like a crazy thing from the [unintelligble.]

DRIVER: Well first of all, I think Bernie's lying. We see him: he slouches forward anyway, Joy. But here he turtles. So if you look at his eye level, where he normally answers questions, when he makes the denial, his whole shoulders come up like a little kid getting caught. His eye level is below his shoulders. This is trying to hide in plain sight. And many of us, we don’t know what to look for. So if you look for this right out of the gate. And the strongest denial is simply ssaying no. And I think women in particular, we want to believe human beings. So we're like yeah, I would say that. He literally said, well, as a matter of fact I didn’t say it. That’s nine words--unnecessary. No.

Also with Bernie, he has numerous hot spots. He says, well. Liars like to say start with well. He looks away, he laughs. I think he might have been coached to laugh in this moment. A lot of politicians are coached to laugh in the difficult times. So we’re focussed on the laughter, and it’s supposed to send a message that this isn’t serious. It is serious. If he said it, which I believe that he did, he would have been better to just own it. Barack Obama wrote a book years ago, years ago. He said what in the book? He tried cocaine and marijuana and he never touched the stuff again. We never talked about it when he was president after that. If Bernie just owned it, this would disappear, we wouldn't be talking about it six days later.