For some time now, Morning Joe has been consumed by a visceral hatred of all things Trump. Friday's show offered up yet two more examples.

First, Donny Deutsch claimed, "If you know Donald Trump, you know there isn't anyone he wouldn't throw -- he would throw his family under the bus. And I don't say that glibly." Joe Scarborough heartily agreed: "Well of course!" A bit later, when Deutsch accused Scarborough of mocking melanoma, Scarborough replied: "I didn't mock cancer. I thought you were talking about your girlfriend, Melanomia."

Here's the transcript of the exchange:

DONNY DEUTSCH: If you know Donald Trump, you know there isn't anyone he wouldn't throw -- he would throw his family under the bus. And I don't say that glibly. 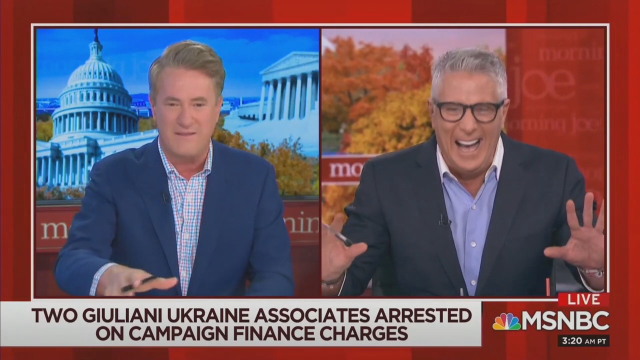 DEUTSCH: You're mocking cancer, Joe. I talked about a melanoma, and you mocked it.

SCARBOROUGH: Well first of all, I didn't mock cancer.

SCARBOROUGH: Your girlfriend, I thought you were talking about your girlfriend Melanomia, somebody that you brought back from --

As you'll see from the above screencap, Deutsch found Joe's play on "Melania" absolutely hilarious.

Perhaps MSNBC could emulate the Philadelphia Flyers, and create a "rage room" where the Morning Joe crew, and other Trump haters from across the network could engage in primal scream therapy. Might be good for their health.