The "public charge" doctrine has been a foundation of American immigration policy going back hundreds of years to colonial times. The notion is that immigrants who are unable to support themselves, thus becoming public charges, should not be admitted or permitted to remain. In 1996, Congress enacted a federal immigration law codifying the public charge principle, and it has remained on the books in the same form ever since.

So what do you call the Trump administration's plan to enforce that law? On Saturday's AM Joy, Democrat pollster and MSNBC contributor Fernand Amandi offered a crazy take: "This is a white-supremacist domestic terror campaign that is targeting people of color in the United States under the name of the United States government, where the casualties are now children and families."

Amandi, whose clients have included the Univision network and the Hillary Clinton presidential campaign, duly employed the left's buzzwords of the day when it comes to attacking President Trump: white supremacy and domestic terrorism.

Perhaps as remarkable as Amandi's absurd allegation was the opposing take of another MSNBCer, legal analyst Danny Cevallos. He actually defended the Trump administration's enforcement of the law. Cevallos made the unassailable observation that "the public charge rule has been around since 1882. It's been statutorily completely unchanged since 1996. The idea has been for well over 100 years that we don't want folks to come here if they're completely reliant on government assistance."

In attacking Cevallos's argument, former Obama aide Nayyera Haq somehow managed to drag in the assertion that "the Walmart family is making $4 million an hour, but Walmart associates are making $11 an hour." Well, that settles it: the Waltons are rich, so immigration laws shouldn't be enforced! 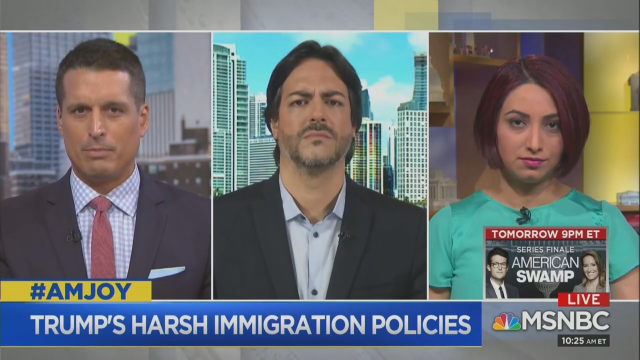 This isn't the first time that Cevallos has strayed from MSNBC's liberal party line. Earlier this year, we noted Cevallos asserting that Roe v. Wade is "ripe to be overturned" because the so-called right to privacy upon which it is based "does not exist." And back in April, Cevallos had the courage to defend Attorney General Barr's decision not to charge with terrorism the Coast Guardsman who had reportedly assembled a hit list of politicians and media members.

So how does Cevallos hang on at MSNBC while espousing such heretical opinions? It could be his polite and diplomatic manner in differing with his colleagues. You'll note that he said that he understood people's concerns on the issue, "particularly Fernand's." And Cevallos told Haq "I totally respect what you're saying" [eliciting a smile from her], before proceeding to demolish her argument.

AYMAN MOHYELDIN [substitute-hosting for Reid]: California, the state with the largest population of immigrants, filed a federal lawsuit Friday hoping to derail the Trump administration's attempt to deny green cards and visa extensions to foreign nationals who use Medicaid, food stamps, or other public assistance. In reference to that sound bite we played from Ken Cucinellis, and the defense he has made that this was on the books through the public charge law. What do you make of the administration’s attempt to try and deny those who are in this country legally a path forward to citizenship, and even staying here, if they’re relying on government assistance?

FERNAND AMANDI: Ayman, let’s call it what it is. These are not good faith immigration policies that are being done to tackle a issue of national concern or crisis. This is a white-supremacist, domestic-terror campaign that is targeting people of color in the United States under the name of the United States government, where the casualties are now children and families.

DANNY CEVALLOS: And I understand people's concerns, especially Fernand's, but the public charge rule has been around since 1882. It’s been statutorily completely unchanged since 1996. The idea has been for well over 100 years that we don’t want folks to come here if they’re completely reliant on government assistance. So I guess, my question --

NAYYERA HAQ: But that’s where it gets confusing to people and I think it’s a very easy way to say public charge means you’re entirely dependent on government. When you look at, say, income inequality and you know that the Walmart family is making $4 million an hour but Walmart associates are making $11 an hour, that is working poor. Those might be people who have children who are US citizens who need that extra hand up to get by. So it’s the demonization of people who are poor who are working —

MOHYELDIN: I want to give Danny a chance to finish his thought: go ahead.

HAQ: It's all about interpretation, right? You're a lawyer, I've been in government. And administrative law ends up being heavily based on discretion.