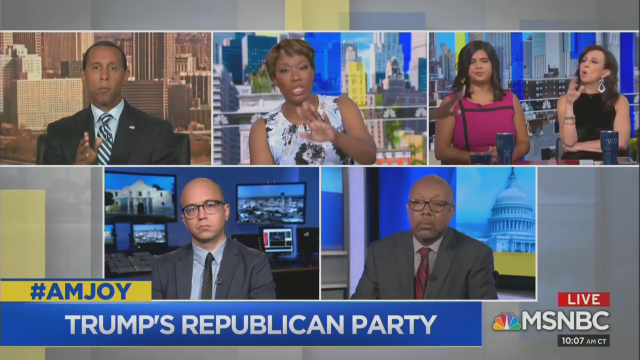 Check out Joy Reid in the screencap, raising her hand to stop and shut down a black Republican who had the audacity to decline her Trump-hating script. The Republican in question was Lenny McCallister, a GOP strategist, seen in the upper left-hand corner.

Reid had put it to McCallister that since, supposedly, Trump's policies hurt the poor, the only thing he has to offer poor whites is racism. In a particularly obnoxious turn of phrase, Reid described Trump as offering his base "maximum whiteness."

When McAllister tried to raise school choice as something Republicans can support and that would have particular appeal to African-Americans, Reid immediately began to interrupt. She was patently peeved that McAllister was effectively refuting her hypothesis. He soldiered on, trying to get a word in over Reid's objections, at one point telling her, "you asked me a question, let me answer."

But Reid wouldn't. Declaring that she wasn't going to permit a discussion of the matter, she cut McAllister off and changed the subject by turning to the reliably liberal Maria Hinojosa of NPR.

Reid has a history of shutting down her Republican guests. You'll find several examples of the phenomenon linked here. In doing so, Reid gives the lie to liberals' supposed love of "diversity." In fact, Reid enforces a rigid ideological conformity. She, like many liberals, is intolerant of true diversity, that of thought.

JOY REID: I'm going to let everybody else in, but I want to stay with you for just one moment, Leonard. Because isn’t the challenge here that Donald Trump understood that most of the policies that Republicans were pushing, the small-government ideas they were pushing pollute their water if they live on a farm. The ideas of doing trade embargoes against other countries kills their own economic condition. That the tax cuts help the rich, don't help them. I mean, Donald Trump kind of understood that he can get more base than that because the actual policies that the elite Republicans wanted helped rich people, but Donald Trump is saying to the poor white Americans, I’m going to give you maximum whiteness. I’m going to let you decide who's an American. I’m going to let you decide what language people should speak. I’m giving you power. I’m going you what W.E.B. Du Bois called "the wages of whiteness," because he can’t give anything else, because the policies help the rich? Isn’t that the problem?

LENNY MCALLISTER: Yes, there's something to be said about that, but you also have to look at other policies as well, such as school choice, such as trying to get some of these regulations out of --

MCALLISTER: Hold on, hold on --

MCALLISTER: But Joy, it also helps disproportionately African-Americans that are stuck in an environment --

MCALLISTER: -- such as Philadelphia. No, no, no. No, no, no. Hold on, Joy — hold on. You asked me a question, let me answer that. If you look at where these kids are going to, it’s not going to corporations and black kids not being able to go to better schools and go to college and be part of the American Dream.

MCALLISTER: That is a policy that disproportionately helps African-Americans.

REID: We're not going to have a whole discussion on schools [cuts off McAllister; turns to Maria Hinojosa.]