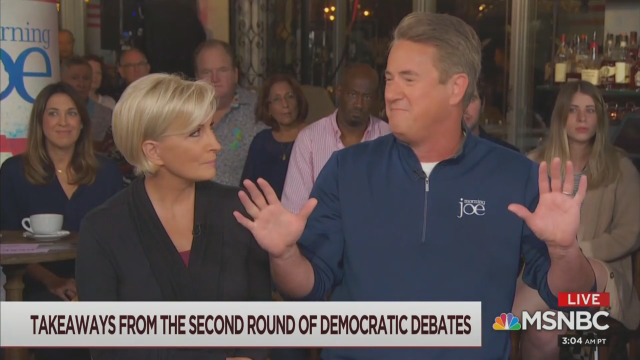 On today's Morning Joe, Joe Scarborough, speaking as someone who unequivocally proclaimed "I want Donald Trump to lose," said that last night's debate was a "disaster" for Democrats.

Scarborough made a four-pronged argument: first, Dems went after each other rather than attacking President Trump. Second and third: the unanimous Dem support for health-care-for-life for illegal immigrants, and for making illegal entry into the US no longer illegal, will lose the Dem candidate several states.

Finally, whereas Kamala Harris scored points with her attack on Joe Biden regarding busing, no Democrat today will actually support busing, moving children, for example, an hour from San Francisco to Oakland. Scarborough also said Biden's performance might have been the "most disturbing" he's seen since Reagan's first 1984 debate.

When Joe stopped his scorching of the Democrats' performance, Willie Geist added one more count to the indictment of Kamala Harris. He noted that Harris "raised her hand again last night to say she would eliminate private [health] insurance." Geist said that position was something that would "haunt" any Democrat candidate.

JOE SCARBOROUGH: You know, this is one of those moments where I have to figure out whether I’m nice, or whether I do what I get paid to do.

MIKA BRZEZINSKI: Well, be nice, and do what you're paid to do.—

SCARBOROUGH: I guess since I want to keep getting paid, I’m going to do —

SCARBOROUGH: -- with apologies to our friends here, and watching, what I get paid to do. Last night was a disaster for the Democratic party. My only hope is, people were not watching, and I will tell you why. First of all on policy — let’s talk about the goal which every Democrat believes, which is, we have to beat Donald Trump. Right? So they’re lined up in trench warfare, ready to get out of the trenches. And charge and fight Donald Trump. Instead, they all turn their guns on each other and shoot each other. And everybody is yelling at each other all night. Everybody. Like if you were watching, if you’re an American and this is your introduction to these candidates and the Democratic party, and all you see are 12 people yelling at each other, trying to interrupt each other, insulting each other, you're like: you know what? I thought Donald Trump was a clown show. I’m changing the channel.

That's the first thing. Here’s the second thing. Won’t be popular among the base. But if you want to beat Donald Trump, you may want to listen. It is a position of every Democrat on that stage that illegal immigrants, if they cross the border illegally, should get health care for life. It is then the position of every Democrat on that stage that if they cross the border illegally it’s not even illegal anymore. Now that may make Democrats feel really good about themselves, right? But that loses Wisconsin, that loses Pennsylvania. That loses Florida. That loses North Carolina. It may lose Virginia. And what these candidates — many of them new to the process, need to understand is, that we as a nation were shocked by the picture we saw a few days ago. But there is a vast middle ground between Donald Trump’s immigration policies and the free-for-all immigration policies that were pushed last night.

I've got to say also, front-runner Joe Biden, man, he was off his game. I must say, won’t make friends here. It was one of the more disturbing debate performances I have seen since Ronald Reagan’s first debate in 1984. It was one of those moments where you’re going, my God, is he going to complete his sentence? There were times he said he was going to give us three points. He gave us one-and-a-half. And then did something that Joe Biden has never done, gave back his time. My time's up! No, Joe Biden doesn’t do that. Joe Biden runs through stop signs. He did that last night. Bernie Sanders was yelling all night. Bernie Sanders didn’t prepare for the debate. It showed, cause he basically gave the same debate performances this year that he gave four years ago. It may have worked when it was Bernie Sanders against Hillary Clinton. It did not work last night. And I can go on and on.

Then he turned to Harris:

I will say the one thing about Kamala Harris, everybody is talking about what an extraordinary moment that was about busing. She’s on the show today so we can discuss this and give her time a little bit of time to come here and figure out a way to whack me for saying this. But, is there really a Democrat today, in 2020, that wants to say I support busing? Is there a Democrat today who wants to say, even in ‘74, I would have supported busing when the overwhelming majority of Americans oppose busing? And by the way, if you’re talking about segregation, immigration, I guarantee you: schools in Miami today are just as segregated by neighborhood as they were back in the 1970s in parts of San Francisco. It was unpopular then, it’s unpopular now. So, is this the position of the Democratic party in 2020? That we are going to get seven-year-old children, we're going to drive them an hour. Take somebody from San Francisco and make them go across to Oakland for school? A second grader? No. No, please. I want Donald Trump to lose. My hope is, that only Trump was watching last night from Osaka, in between snuggling up to Vladimir Putin.