You know how global warmists find a way to blame everything on global warming, even the recent spell of historically frigid temps? Perhaps inspired by that topsy-turvy logic, Morning Joe, during today's SOTU discussion, managed to blame President Trump for the late-term abortion/infanticide bills that Dem legislatures have recently adopted. For good measure, the show even blamed the prez for the Dems' socialist surge. AOC? Trump's fault!

"I also thought it was interesting when he said we will never be socialists. I thought Mike Murphy really had great insight when he said the only reason why extreme candidates are being elected right now, the only reason why we are more open to socialist candidates right now is because you, is because of you. You are requiring Americans to look for extreme answers to the crisis that you, Donald Trump, have created."

Then it was the turn of "MSNBC Republican" Rick Tyler:

"He mentioned the life issue last night and abortion. And it was a strong 60 seconds, even though it came later in the speech, if you are pro-life. But what is not said is he's responsible for that legislation in Virginia and New York because he got those people elected who would pass pro-abortion legislation. So, in a sense, he's responsible for it."

There was one point of light during the discussion, though it could also be seen as Scarborough serving as campaign consultant to the DNC, warning Dems that they have gone too far on abortion.

SCARBOROUGH: I do want to just say for Democrats, because it hasn't been mentioned much in the mainstream media, and I'm glad you brought up the late-term abortion legislation passed in New York and Virginia. This is such a blind spot for Democrats, just like NRA actions after Sandy Hook, the video games and, again, refusing to pass any reasonable, rational legislation, painted Republicans as extremists. Democrats have a blind spot. They do not understand how out of step with America they are. Not only passing extreme late-term abortion legislation but then celebrating it. It's a real blind spot for Democrats that will cost them votes in states they will need in 2020 if they don't recognize it as a national party."

Willie Geist supplied some statistics to back up Joe's argument:

"The most recent reliable polling comes from last June from Gallup. Shows 13% of Americans support late term abortion, 13%. And by the way, that includes only 18% of Democrats, to your point."

Note: Scarborough criticized Dems for celebrating the passage of their extremist abortion bills. Could anything have been more ghoulish than Gov. Andrew Cuomo's decision to have the Freedom Tower lit up in pink? The very needle itself brings to mind instruments used to end the lives of innocent children. 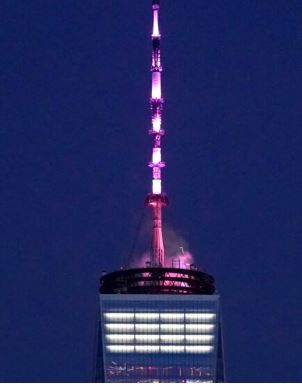