Such a magnanimous guy, that Joe Scarborough. He doesn't usually judge his friends, no matter how they vote. But not this year. On today's Morning Joe, Scarborough said that not judging friends is "a little harder to do in 2018."

A Scarborough  tweet that was displayed made clear what Joe had in mind: anyone voting for "Trump" [i.e., for Republicans] is voting for "lies," and "racism."

Although Scarborough didn't use the e-word—evil—he was effectively echoing Howard Dean, who recently declared that this election is "a struggle about good versus evil. And the President of the United States is evil."

So go ahead and vote Republican, if you dare. Just don't expect to be invited to cocktail parties in Joe's circle of friends, you supporter of lies and racism.

JOE SCARBOROUGH: I've always had a lot of Democratic friends, got a lot of liberal friends, I've had a lot of conservative friends. I've had a lot of libertarian friends. And my feeling has been, you know what? This is America. It's a big country. You vote the way, obviously, you want to vote and I'm in no position to judge you. That's a little harder to do in 2018 . . . [Republicans are] lying through their teeth. They're spreading the big lie. They are attacking non-white people. And Donald Trump has chosen, he has chosen to choose racism, over a strong economy. 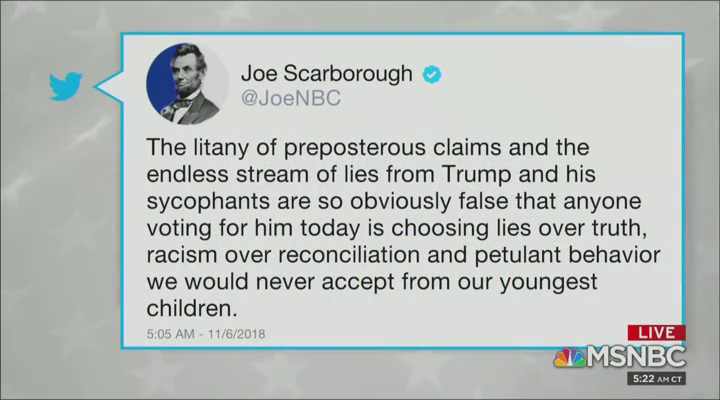 Byron York reported that the media's conventional wisdom isn't accurate. In reality, Trump's rally speeches spend more words on the economy than illegal immigration (or they're roughly the same). He's not "choosing racism" over touting the economy.