On Kavanaugh, CBS's Dickerson Gets Nasty With Tom Cotton

Was that really John Dickerson interviewing Sen. Tom Cotton on Face the Nation today, or was it a lifelike droid programmed by Dem Sen. Mazie 'Shut Up, Men' Hirono?

The question arises because the normally mild-mannered Dickerson was shockingly combative with Cotton. View the video, because the transcript alone doesn't do justice to just how sarcastic and confrontational Dickerson was.

Dickerson twice talked of facts being "wrestled to the ground." You got the sense that, given the chance, the thing that Cotton would have wrestled to the ground was . . . Dickerson. Check out the very end of the interview. After Dickerson gives the obligatory "thank you," Cotton counters with a curt nod and a stare into the camera as if to say, "can you believe this ----?"

Note: my favorite line was when Dickerson asked a vague and ambiguous question as to whether it would be relevant if Kavanaugh said something untruthful regarding an unrelated matter, and Cotton gave the deadpan reply: "what are you talking about, John?"

JOHN DICKERSON: A woman came forward here, and you're saying bascially she said nothing credible. How can women come forward if when they do, they're told they're not credible? . . . So that a woman thinking about coming forward will have it immediately turned into a partisan issue, as you've done it. Her issues aren't being discussed by you; you haven't discussed them since you've been here. 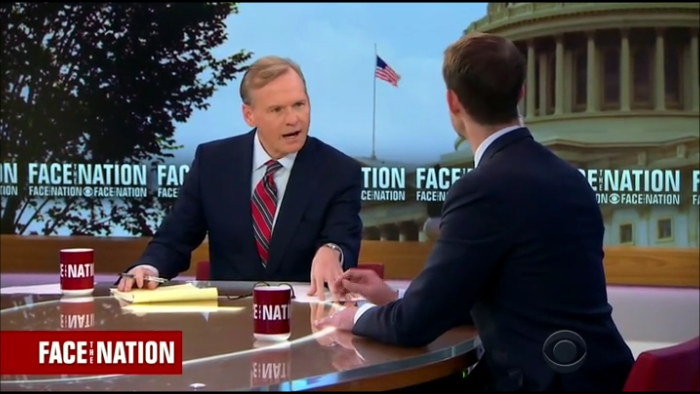 TOM COTTON: I don't know what the FBI's going to find that the committee has not already found. The committee staff has already interviewed all the witnesses that Ms. Ford cited. They interviewed Ms. Ford and Judge Kavanaugh for six hour --

DICKERSON: Well, added would be Mr. Judge. He sent them a letter: that wasn't an interview. So you're not right about that.

TOM COTTON: So they've either interviewed them, or they've received letters --

COTTON: -- under penalty of perjury.

COTTON: I'd be surprised if any of these people, under penalty of perjury, change their statements that they've already given to the Judiciary committee.

DICKERSON: Well: surprised. But that's why we have investigations. Wrestle stuff to the ground, have a neutral fact pattern. Clearly the members of the committee on the Republican side want Kavanaugh to be confirmed. So why should people who want him to be confirmed be in charge of the investigation? Why not have neutral observers wrestle the facts to the ground, which is what is happening now. So it's not a waste of time.

DICKERSON: If it turns out he was not truthful about that has nothing to do with what allegedly happened 36 years ago, truthfulness is still something you want in a Supreme Court nominee, though. Is that relevant?

COTTON: What are you talking about, John?

DICKERSON: But if it turns out in the course of the FBI investigation that --

COTTON: Are you talking that the Democrats now want to have an open-ended fishing expedition --