Harris-Perry: By Showing Malik in Hijab, NYT Suggesting 'This Is What Terrorism Looks Like'

They would have used a photo of her in an NRA cap, but none was available . . . Man, it's getting hard to navigate the nuanced shoals of political correctness. Now, even the ineffably sensitive New York Times has run afoul of the rules, as propounded by Melissa Harris-Perry. On her MSNBC show today, Harris-Perry griped that the Gray Lady had run a photo of Islamic terrorist killer Tafsheen Malik wearing a hijab. As per H-P, the Times was sending a message that "this is what terrorism looks like."

Damn those anti-Muslim bigots of the New York Times! But seriously, what was the poor paper supposed to do? Should the Times have photoshopped the hijab off Malik? Harris-Perry might have complained the paper was suggesting there was something offensive about the garment. Sometimes you just can't win with the PC police.

Before Harris-Perry's complaint, panelist Linda Sarsour of the Arab American Association of New York said she was "extremely disturbed" and found it "absolutely outrageous" that the Times had run front page photos of the interior of the apartment of the San Bernardino terrorist couple which showed typical Islamic furnishings and decorations. As Harris-Perry subsequently said about the hijab, Sarsour suggested that the Times was sending a message that "this is what terrorism looks like."

Note: before kvetching about the Times, Sarsour said something that I would invite readers to interpret. "We went from immediately knowing from eyewitnesses that they were three white males. Which by the way multiple witnesses--three medium-built, heavy-built white males--and let's not even go there." Where would "there" have been in Sarsour's mind?

MELISSA HARRIS-PERRY: The resistance to using terrorism, for example, to talk about Charleston or to talk about, even, the Planned Parenthood shooting, versus the willingness, Linda, to talk about it when in fact shooters are also people who are Muslim.

LINDA SARSOUR: I mean, it's deja vu for me every time the perpetrators end up being Muslim. We went from immediately knowing from eye-witnesses that they were three white males. Which by the way multiple witnesses--three medium-built, heavy-built white males--and let's not even go there. And then you were talking about gun control, and Think Progress went all over the Republican candidates about "thoughts and prayers," not fixing the law.

And then all of a sudden we find out they're Muslim. Bam--gun violence is out of the question. We start talking about terrorism. And I'm extremely disturbed. I looked at the New York Times cover today. There you have a whole op-ed on gun control. Great. Right next to it is pictures from the apartment of things that I have in my house.

SARSOUR: These are things that all Muslims had their house. There's nothing about that that tells you a story about what terrorism looks like. So you're telling me that when my friends who are not Muslim come into my home and see a Koran on see frames on the wall with a scripture from my religion, is that supposed to tell you something? I mean, it's absolutely outrageous. We would never do that to anyone. We didn't do that to Dear, we didn't do that to Roof. I'm tired of the double standards of how we treat Muslims when they are the perpetrators.

HARRIS-PERRY: That image, and also right next to it an image of the shooting suspect there in hijab. And the idea that, okay, this is what terrorism looks like, I, for me, there is a difference, and it is a material and meaningful difference, in how we, so on the one hand again, I want to be able to talk about what the thing is that is terrorism, but on the other hand, I have to reflect that this happens only for specific communities. 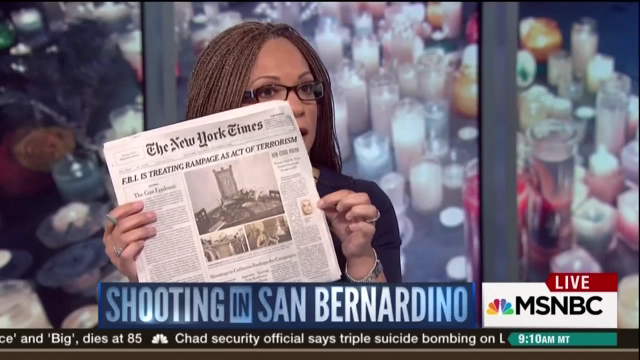