It was one of those stunning live-TV moments revealing the seamier side of TV news.  Pat Brown is a criminal profiler who has taken a principled stand on media appearances about mass murderers. She will not discuss individual criminals, their motives, etc., believing that to do so only increases the number of mass murders.

But when Brown appeared on CNN's New Day this morning, co-host Christi Paul immediately tried to engage her in a discussion of Colorado Springs shooter Robert Dear's possible "anti-government" views. Retorted Brown: "I'm a little disturbed because I made an agreement with CNN to appear this morning only under the condition that we do not talk about the particular shooter, use his name, or show his face." Undeterred, Paul tried to lure Brown into a discussion of the shooting investigation, but again Brown rebuffed it There the interview ended, but co-host Victor Blackwell came on to claim that the agreement had been honored because neither Dear's photo nor name had been used. Didn't use Dear's name? Really? Have a look at the screencap, Mr. Blackwell.

View the video and watch CNN get called out on its bait-and-switch invitation to Brown. It's ironic that Brown thought she had an agreement to discuss the way the media has contributed to the recent tripling in mass murders by giving the murderers such attention. And then CNN proceeded to try to do just what Brown has been complaining about. Talk about adding insult to injury!

CHRISTI PAUL: I want to bring in criminal profiler Pat Brown, she's the author of "Killing for Sport: inside the minds of serial killers." Now, I want to make it very clear we are not characterizing him as a serial killer. But this is Pat's field of study and her expertise, and Pat, I know that a neighbor said the suspect gave him an anti-government flyer. Let's listen to what this neighbor had to say about the suspect.

NEIGHBOR: They were nice, really nice guy, you know? Talking to us and everything. Gave us some anti-Obama flyers, little pamphlets and I didn't even really read them. I just -- I think I used them to start the fire in our camp fire that night.

PAUL: And again, there are reports that he did say some things that seemed to indicate an anti-government view to investigators since his arrest. What does that specifically -- you know, that background on him tell you, if anything?

PAT BROWN: Well, I'm a little disturbed because I made an agreement with CNN to appear this morning only under the condition that we do not talk about the particular shooter, use his name, or show his face. Not to talk about the particular mass murderer. I do not do that. I took a stand three years ago not to talk about individual mass murderers because I believe we in the media are increasing the number of mass murders. It has tripled in the last decade and it's my belief that the notoriety we give them does this. And I came on this morning to talk about the media's role and responsibility in stopping talking about the mass murderers. We don't need to that. They are the same mass murderer every time. All we need to say is this: an attention-seeking, psychopathic loser has committed a heinous crime and we're not going to talk about any him any more. The motive is always the same: power, control, and attention in the media. And that is what we are giving him every time we talk. We need to stand down as a country and say we don't need to hear any more about these mass murderers. We're just going to stop talking about them. We are not going to name them, we're not going to show their face and we're not going to sit here and discuss forever and ever and ever what his motive is because it doesn't matter. He's a horrible criminal. He has committed a heinous crime. Put him away and that is the end of it.

PAUL: Okay, and I understand that. And I respect your views on that, surely. But we certainly can talk about the investigation into what is happening, can we not?

BROWN: No, we cannot. I specifically said I will only come on if we don't talk about this individual mass murderer. We do not need to do that. That is my stand for three years. And I was surprised actually that I got to come on this morning because in three years I've given the same statement and I've been turned down for three years and I was so happy that CNN was going to let me come on and talk about the media's role and responsibility and the increase in mass murder and so thank you for that but I'm sorry we didn't stay with the topic that I came on to talk about.

PAUL: All right. I understand. I respect your views. And I thank you for coming on.

VICTOR BLACKWELL: Let's be clear, and let me read from the e-mail from Pat Brown. Here's the quote. Is my segment free of any photo or name of the mass murderer? That segment did not have any photograph nor use the name of the suspect and we held to that agreement. 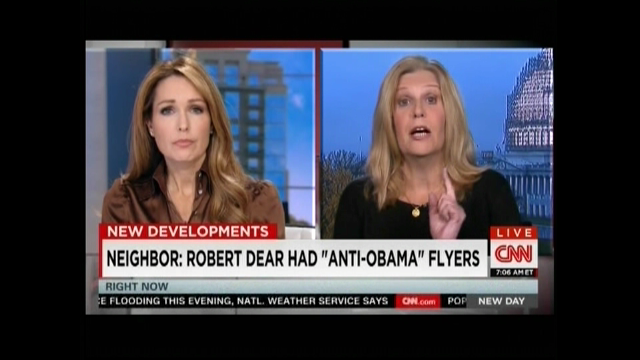