Can anyone honestly claim that Larry David seemed serious when he yelled "you're a racist" at Donald Trump on last night's SNL? Trick question: I said "honestly." Enter Washington Post TV critic Hank Stuever who in his review of Trump's SNL appearance last night [subtly headlined "Trump’s sorry night on ‘SNL’: An overhyped bummer for us all'], actually claimed that that David's "racist" cry seemed "genuine enough." But if ever an actor went out of his way to signal that he was simply spoofing, it was David.

Have a look at the clip, and you'll see that--far from expressing genuine outrage--David at one point struggled to keep a straight face. And when Trump asked him what he was doing, David sheepishly shrugged his shoulders and threw out his arms in apologetic explanation, saying he "had to do it" because they promised him $5,000. "Genuine enough?" How about "obviously acting?"

The rest of Stuever's review was a virtual parody of a pan, so unrelentingly negative was it. Lowlights: "an anemic and halfhearted dud;" "boring and misspent;" "a hateful, nonsensical, vainglorious presidential candidate;" "jokes . . . fell flat;" "one dud after another;" "sketch . . . fell apart quickly."

You get the feeling that if Trump had been a mash-up of Robin Williams, John Belushi and Alec Baldwin at their best, Stuever would have given him no more than a "meh."

DONALD TRUMP: And we're going to have a lot of fun tonight.

LARRY DAVID: You're a racist!

TRUMP: Who the hell is -- oy, I knew this was going to happen. Who is that?

TRUMP: It's Larry David. What are you doing, Larry?

TRUMP: As a businessman, I can fully respect that; that's okay. 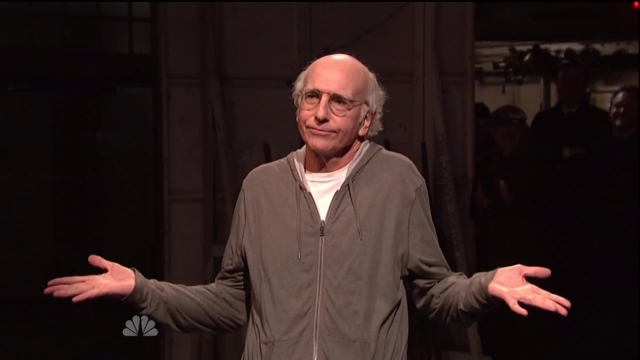