Joe Scarborough has dropped the f-word on live TV.  But does he dare drop the I-word: Islam?

On today's Morning Joe, Scarborough to his credit rejected the maudlin pseudo-introspection of those [including panelist Richard Haass] who would somehow blame America's failure to integrate the Tsarnaev brothers into society for their decision to bomb the Boston Marathon. Scarborough didn't hesitate to call the Tsarnaevs "beasts." Instead of blaming society, Scarborough blamed the brothers' "evil" and "radicalism." But Scarborough stopped short of naming the radicalism for what it is: radical Islam. View the video after the jump. 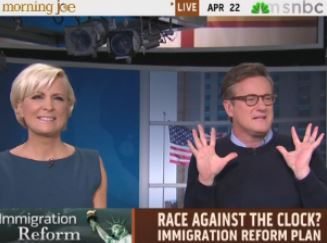 There is a rapidly building mountain of evidence that the Tsarnaevs indeed acted out of a jihadist impulse—from warnings from the Russians, to statements by family members, to the jihadist websites that Tamerlan Tsaernaev visited.

So in declining to mention radical Islam, was Scarborough acting out of an abundance of caution, a PC instinct, fear, or something else?

Note that Scarborough praised a column by Kevin Cullen in the Boston Globe on the subject.  Cullen's point was to the same effect: don't blame American society for the Tsarnaevs' evil acts. Unlike Scarborough, Cullen did mention the Tsarnaevs' Muslim religion—if only to claim that they had twisted it, and to advise against any backlash against other Muslims.