The Morning Joe panel was tough today on the Obama White House for threatening Bob Woodward by telling him he would "regret" his reporting that it was the Obama administration that had devised the sequester,   In the course of the opening segment, various panel members described the Obama White House response as "mickey mouse," "pathetic" and "childish."

But at the same time, a theme emerged that there was nothing unusual about a White House trying to intimidate reporters.  Mark Halperin said "the Bush White House regularly would engage in the same kind of tactics." And Joe Scarborough and Andrea Mitchell shared stories of having been threatened by the Bush and Reagan White Houses, respectively.  Andrea named names.  Scarborough did not.  H/t readers Ray R. and cobokat. View the video after the jump. 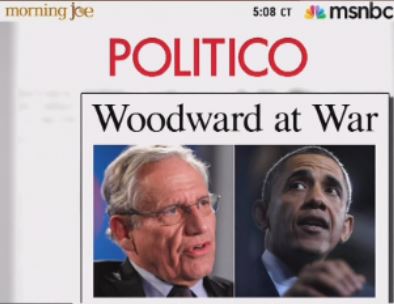 As Scarborough told it, during the Bush years a White House official called during the show [Scarborough Country, it would seem] to take issue with something he had said, and wanted to dictate a response to Scarborough's executive producer. Scarborough threatened to fire the producer if he wrote the comment down, and in response proceeded to run the story for the next two weeks.

Mitchell then told her story about having been threatened with losing her job by Don Regan, Chief of Staff to President Reagan, for her reporting on Iran-Contra.

Willie Geist downplayed the seriousness of the White House threat to Woodward that he would "regret" his reporting.  According to Geist, the Obama official only meant that Woodward would regret having inaccurately reported the matters in question.


MARK HALPERIN: We should say, although this White House apparently has a history of doing this, the previous White House did as well. The Bush White House regularly would engage in the same kind of tactics.

JOE SCARBOROUGH: This happens in every White House. And Mika, I remember this happening. And I'm not going to tell the story on air specifically but I remember a story with the Bush White House calling me up and threatening me. It was really a bad, bad mistake.

MIKA BRZEZINSKI: You annoyed them.

SCARBOROUGH: Then I ran the story every night for two weeks. And I did it specifically to show them you call me again—they called in the middle of the show—and demanded that our executive producer take something down. Our executive producer, this a ways back, started to take it down. I said you take it down, I'm going to fire you. And I want you to know: we do this story for two weeks. And guess what? They never did it again.

WILLIE GEIST: I didn't read it the way Bob laid it out. I didn't read it as a Mafioso-style threat against him. They were basically saying you're going to regret this because you're reporting in the end will turn out to be wrong. That said, they picked the wrong guy probably to do it to.

ANDREA MITCHELL: I recall back when I was a young reporter in the Reagan White House and I had good sources and good relationships, but there was a chief of staff named Don Regan and after I reported something on Iran-Contra, very publicly, he called me and threatened me and said you're going to regret this but said it in far worse terms and using profane language and as a young White House correspondent, I was really terrified by that.  Not fearing for my safety but fearing for my career. He said he'd get me and that I'd be fired. And he was going to get to NBC. Of course that didn't happen.

SCARBOROUGH: Thank you, Don Regan. What a shock. I never would have imagined that coming from Don Regan.

MITCHELL: How could that have happened?