From Joe Scarborough to John Heilemann, Katty Kay to Mark Halperin to Willie Geist, it was unanimous on today's Morning Joe.  Whatever the substance, whatever the policy, Republicans would be making a massive political mistake by opposing the possible nomination of Susan Rice as Secretary of State.

Summed up Scarborough the MJ zeitgeist: "do a bunch of old white guys want to make their first big battle, post-election, a battle going up against a younger woman of color?" View the video after the jump. H/t reader cobokat. 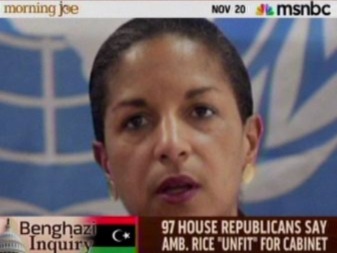 Watch and weigh in.  Should the woman who most prominently perpetrated the Obama admin's false story of the Benghazi attack be rewarded with promotion to the position of America's chief diplomat?

JOE SCARBOROUGH: The optics, as they say, doesn't optics doesn't look really good for the Republicans.


JOHN HEILEMANN: The optics are obviously horrible, taking on an African-American woman in this way.

SCARBOROUGH: This is the first big fight, following an election where Republicans got routed. Not just among African-Americans, but among Hispanics, among Asian-Americans. I really wonder, do a bunch of old white guys, Mika, want to make their first big battle, post-election, a battle going up against a younger woman of color?

KATTY KAY: you're right, joe, to suggest that what are the optics of this? Here they are coming out of an election where the very people that they need to be reaching out to, younger women, younger single women, and everybody from groups of minority where they would devastated in every single minority group. And their first fight is to take on a young black woman. I mean, it just seems to be, it seems to people in the White House, they don't understand the politics of this, what the Republicans are trying to achieve.

MARK HALPERIN: If you're a Republican strategist today, as far as I am concerned, your smartest thing is to figure out how to talk Senator McCain and Senator Graham down from filibustering, and coming up with an excuse. Cause if the president nominates her, and they filibuster it and the White House says bring it on --

SCARBOROUGH: This is about as discordant, again, politically, of course I'm sure they'll come on and say they might say it might not be good politics but it's great policy.  Fine, go ahead and do that, but my gosh, I don't see it.

HALPERIN: We're not minimizing the lack of security beforehand, all the other substantive issues. But the pure politics of it, Republicans are putting themselves in a horrible place.

WILLIE GEIST: I believe Senator John McCain thinks there were major failures. I believe he thinks Susan Rice would be a bad choice. Your point is an important one that the optics of this are terrible. Old white guys taking out a young, African-American woman, But John McCain and Lindsey Graham and others that are challenging say this isn't about optics. It's about the importance of foreign policy, it's about the importance of where we go next.