Barnicle made his suggestion on today's Morning Joe, during a discussion of the attacks on the American embassy in Cairo, Egypt and the American consulate in Benghazi, Libya, where the American ambassador died after an attack by a Libyan mob. Fellow panelist Donny Deutsch responded by saying he was "thinking the same thing" as Barnicle.  View the video after the jump. 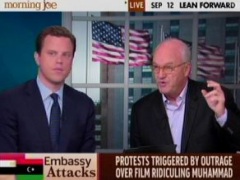 MIKE BARNICLE: Given this supposed minister's role in last year's riots in Afghanistan, where people died, and given his apparent or his alleged role in this film, where, not yet nailed down, but at least one American, perhaps the American ambassador is dead, it might be time for the Department of Justice to start viewing his role as an accessory before or after the fact.

DONNY DEUTSCH:     I was thinking the same thing, yeah.

Jones is reported to have defended and promoted a YouTube video depicting the Prophet Muhammad in vulgar and insulting ways.