At least Barney didn't accuse Paul Ryan of going all Twilight on starving children, or of actually pouring kerosene on burning buildings.

No, appearing on Al Sharpton's MSNBC show today, the retiring Dem congressman contented himself by claiming that Ryan opposes people coming together to feed poor children or put out fires. View the video after the jump. 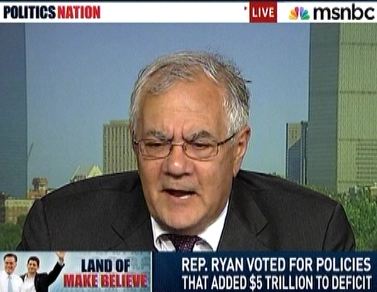 You really can't blame Barney.  In his world, if the federal government doesn't do something, it doesn't get done.  If you oppose federal control and funding of local responsibilities, you oppose the activity itself.  And as for private citizens coming together to help others without government involvement?  Oh, the horror!

Watch the unintentional parody of progressivism that is Barney Frank. After a long litany of attacks on Ryan, he rose to this kvetching crescendo:

BARNEY FRANK: What it is, is this. These are right-wingers who have this philosophy, going back to Ayn Rand, that says we should not come together to do things for the common good.  That individualism is the answer, and that everybody should be on his or her own. So feeding poor children, cleaning up the atmosphere, putting out fires in older cities: those are things for which they would deny funding.