This could go down as some of the worst political advice ever.  Then again, consider the source.  Chris Hayes isn't exactly in the business of helping conservatives lead . . . or win elections.

On his MSNBC show this morning, Hayes advised conservatives to call the war that President Bush led against Iraq "criminal."  Yeah, that's the ticket. Video after the jump. 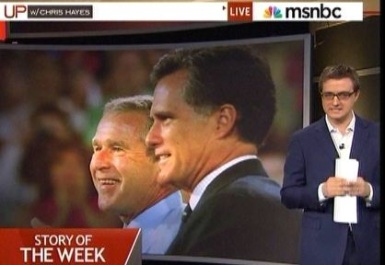 Hayes offered up his keen political insight in the course of inveighing against attacking Iran in order to prevent it from acquiring a nuclear weapon.  According to Hayes, it's not that Iraq was the wrong pre-emptive war. It's that pre-emptive war is, apparently, among other things, always "criminal."

Query whether Hayes would call Bill and Hillary Clinton, and a long list of leading liberals, criminal co-conspirators for their support of the Iraq invasion?  Does Hayes believe it would it have been criminal had the Allies pre-emptively attacked Hitler's Germany prior to its invasion of Poland?

CHRIS HAYES: Sometimes I think this can't possibly be happening.  After the horror of the last decade, are we really going to countenance a pre-emptive strike against a Middle Eastern country that is supposedly attempting to acquire weapons of mass destruction? The lesson of Iraq was not, as the conservative establishment seems to think, that we waged the wrong pre-emptive war.  But rather, that pre-emptive war is wrong.  It's not: whoops, it would have been better if we had better intelligence. It's that attacking a country unprovoked is criminal. It violates basic international norms and moral codes. It is reckless and dangerous.  It creates the conditions for bloodshed among innocents and expensive and costly blow-back.  And if conservatives really want to convincingly distance themselves from George W. Bush, they could start by acknowledging that.