Trust him--he might be young, but he's a "professional sociologist."  So did Harrison Schultz, an organizer of the "Occupy Wall Street" protests, describe himself to Al Sharpton on MSNBC this evening.  And he wants Al and us to know that "a lot of the people that are here are in fact anarchists, are in fact revolutionaries.  . . . We don't really want to fix [the problems]. It's revolution, not reform."

There are also some amusing factoids about Harrison.  When he's not out fomenting revolution, Schultz is an . . . analyst for a marketing firm. Oh yeah, and in his oh-so-bourgeois LinkedIn profile, Harrison wants people to know he worked at Bank of America providing "assistance for several investment bankers." Oh, the horror! Video after the jump.

Keep hope alive, Harrison!  Remember, not too long ago another young radical described his time in the private sector as having worked "behind enemy lines"--and went on to become President of the United States!

AL SHARPTON: Joining me now from lower Manhattan near Wall Street is Harrison Schultz, one of the organizers of Occupy Wall Street. Harrison, thank you for coming on the show.

HARRISON SCHULTZ: Thank you for having me, Reverend: happy birthday!

SHARPTON: Thank you. Tell us a little bit about the movement that's going on in Wall Street.

SCHULTZ: The movement down here is incredibly exciting.  It's incredibly exhilirating. And I see my opinion as a professional sociologist, I think that this is the beginning of a revolution in this country . . . We're all for change. We all want something different.  We all want something better. As far as the specifics, as far as how we go about doing that, we don't know yet. Part of the problem, part of the issue is that I think that a lot of the people that are here are in fact anarchists, are in fact revolutionaries.  And putting a revolution, putting a revolutionary change into political terms is very difficult to do. Because we're trying to get away from all the problems.  Again, we don't really want to fix them: it's revolution, not reform.

It's fashionable among liberals to cast Occupy Wall Street as the left's version of the Tea Party.   Take this piece by Michael Scherer at "Time," for example: Occupy Wall Street: A Tea Party for the Left? Scherer claims that "there is great potential for [Occupy Wall Street] spreading further," and that the movement has "huge potential."

You go, Harrison and Michael!  The Republican party largely embraced the Tea Party.  It led to historic victories in 2010, and has positioned the GOP to take back the White House in 2012.  Were the Democrats to similarly embrace Occupy Wall Street, with its self-described band of "anarachists and revolutionaries" who "don't really want to fix the problems," the Dems could be looking at an historic defeat next year. 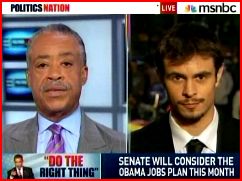