Steve Israel had his talking points, and he was sticking to them. Republicans want to "end Medicare" in order to give tax cuts to the big oil companies. On Morning, Joe Scarborough repeatedly called out Israel, head of the Dem congressional campaign committee, on his demagoguery. Not that it stopped the Dem congressman from New York from repeating his rap.

For good measure, Obama adviser Valerie Jarrett appeared later and claimed that Medicare could be maintained without cutting a penny of benefits to seniors merely by finding various "efficiencies" in the program. Waste, fraud and abuse ride again!

STEVE ISRAEL: Voters in [NY-26] decided they did not want to elect a member of Congress who would vote to end Medicare in order to fund tax cuts for big oil companies.

JOE SCARBOROUGH: I will tell you one thing, Steve. I like you but we do not allow talking points on this show.  That's a talking point and you know it . . . [Ryan] is not doing this to fund tax cuts for big oil companies.

ISRAEL: We're not going to negotiate to end Medicare.

SCARBOROUGH: I want to save Medicare and I know that nine years from now Medicare collapses unless changes are made and those changes have to slow down the rate of growth of Medicare.

ISRAEL: Ending Medicare doesn't slow down the growth . . . The problem is every time we talk about some options, the response we get [from Republicans], with all due respect, is "no, we're going to end Medicare." You cannot begin the negotiation by ending Medicare.

PAT BUCHANAN: Isn't it also demagoguery to say they're going to end Medicare as we know it?

ISRAEL: That is not demagoguery--it is plain fact . . . The problem is that our attempts to address [the] issues have been met with two words: end Medicare.

Senior Obama advisor Valerie Jarrett appeared a bit later, and proposed a totally painless plan to protect Medicare.  No cuts in benefits.  Not "a penny."  Nope, everything will be dandy simply by discovering various new "efficiencies" in the program. And as everybody knows, when it comes to efficiency, there's nothing like big government social programs!

VALERIE JARRETT: We think that we can find efficiencies within the system without in any way cutting the benefits to our senior citizens . . . What the president isn't willing to do is to add any additional burdens on the backs of our senior citizens at a time in their life when they're most vulnerable. That doesn't mean that there aren't efficiencies in the Medicare program that we can find, and we're looking across the board at government for efficiencies.

That was too much malarkey even for David Gregory.

DAVID GREGORY: But nobody who looks at this seriously thinks that looking at efficiencies is the way to solve Medicare's problems.

JARRETT: Oh, I think you can.  I mean, if you've added twelve years already to the solvency of the program, that's a step in the right direction. So I wouldn't rule out efficiencies. I think throughout government we're looking for efficiencies and ways of streamline the process, and I think within the Medicare program there is actually ample opportunity for that. 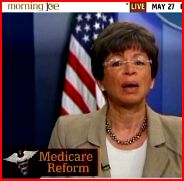