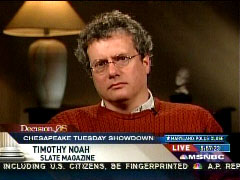 Somebody call the Epidemiology Branch at the NIH.  It's looking as if we're on the verge of a full-fledged epidemic of Obamania.  As we noted here, NYT columnist Bob Herbert suffered an acute bout of the malady on live national TV yesterday, seeing visions of the Leaning Tower of Pisa and the Washington Monument where none existed in the McCain  Obama/Spears/Hilton ad. By yesterday evening, Keith Olbermann had contracted the affliction in aggravated form, claiming, as NewsBuster Brad Wilmouth has noted, to see no fewer than three phallic symbols in the same commercial.

Now, yet another variant of the dread disease can be reported, affecting mental rather than visual acuity. In When "Skinny" Means "Black" at his "Chatterbox" column at Slate, Timothy Noah [file photo] claims to see, yes, racism, in mention of the fact that Barack Obama is thin.

Noah was reacting to a Wall Street Journal article by Amy Chozick, Too Fit to Be President?, which asks whether Obama's svelteness could be a political liability.  Chozick wonders whether in a country "in which 66% of the voting-age population is overweight and 32% is obese," some voters might resent the slender Dem.  Beyond his trim physique per se, Chozick suggests a cultural gap between Obama and many Americans reflected in his fitness-center fanaticism [she recounts a recent day in which he worked out three times for a total of over three hours], his eschewing chewing fattening foods offered on the campaign trail, and his famous question to an Adel, Iowa crowd as to whether they, too, had experienced the horrors of the high price of arugula at their local Whole Foods.

Pretty harmless, nay, funny stuff, and absolutely nothing linked to race. Or so you might think. But you're not Timothy Noah.  You haven't come down with a bad case of Obamania—yet.  Noah sees clear racial overtones in all this.  Excerpts [emphasis added]:

Now all that would be funny, too, but Noah apparently isn't kidding, right down to the self-censorship of the press he proposes. He even misrepresents Chozick's report to fit his narrative.  Thus he ominously notes that Chozick quoted "an unnamed Clinton supporter" saying she wouldn't vote for "a beanpole guy."  But Noah ignores the preceding quote Chozick provided from "Diana Koenig, 42, a housewife in Corpus Christi, Texas" who said Obama "needs to put some meat on his bones."  A more glaring oversight on Noah's part: the only person Chozick directly quotes calling Barack Obama "skinny" is . . . Barack Obama.  She reports Obama having told a San Diego crowd last month: "Listen, I'm skinny but I'm tough."

So who's the racist now?  And who's "clueless"?

Although no known antidote for Obamania exists, the researchers here at NewsBusters are working feverishly to develop one.  Not sure whether this would constitute torture under the Geneva Code, but I'm thinking that some shock therapy—in the form of being subjected to a 24-hour continuous loop of Olbermann re-runs—might just do the trick.

Note: from JBlog Central:  Timothy Noah, master of self parody: "I kept checking to make sure this wasn’t just something I missed on April 1st, but no."