Scarborough: Nader Not All Wet On Obama 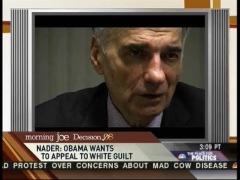 I don't think that racism is too strong a word for what he said.

But as uncomfortable as Nader's statement might make some people, could there be a kernel of truth to it? Joe Scarborough seems to think so. And even Prof. Michael Dyson—Obama fan and commentator on matters racial—seemed to acknowledge that "ghetto-speak" would hurt Barack, going so far as to imitate the kind of street accent that could damage the candidate's campaign.

Discussion of the controversy led today's Morning Joe.  After a clip of Nader's remarks aired, this conversation ensued:

Mika was not in a forgiving mood.

MIKA BRZEZINSKI: No, I kinda can't.

SCARBOROUGH: But you can't dismiss it?

BRZEZINSKI: No I cannot.

SCARBOROUGH: Alright, why is that?

BRZEZINSKI: I just, I want to know just what exactly he was getting at.

SCARBOROUGH: Well, I think, Willie Geist, what he's getting at, he's saying Barack Obama is trying to sound white. And --

Mika was apparently shocked at the notion.

SCARBOROUGH: And because if he talks about, as he said, "the ghetto."

Perhaps.  But there's an honesty to it lacking in the euphemistic "inner city."

SCARBOROUGH: Next he's going to talk about "urban renewal." But if he talks about race and poverty and all these other issues, Ralph Nader believes that he won't be white enough to be elected.

GEIST: We'll play a little more of the soundbite after Mika's news, give you a little more context.  But even with the context . . .

BRZEZINSKI: Why go there? Why you gotta go there?

SCARBOROUGH: Let me say this: we've had some political strategists come on this show, who we all respect very much, who have said, who we've said, why can't the guy just relax? Why does he seem so uptight? Why is he always wearing a coat and tie when he's bowling for God sake, or drinking?

BRZEZINSKI: That has just nothing to do with --

SCARBOROUGH: And—hold on a second, hold on a second—and the response that we get from more than one smart guy, or woman, is that they talk about Kennedy.  When Kennedy ran as an Irish-Catholic, he had to be the most anglicized, white, Eastern Seaboard Irish Catholic that ever was. The same thing with Barack Obama.  There are a lot of people who are saying Barack Obama faces an uphill climb, and for him to win he's got to be like Kennedy, he's got to be the whitest, most anglicized, non-threatening African-American. That's what people have said on this show. When you put it in that context, of course it doesn't seem offensive to a lot of people, this [what Nader said] does seem offensive.

When the prolix professor Dyson came on a bit later, he rejected Nader's assertion that Obama isn't addressing substantive issues of importance to African-Americans. But he seemed to second Scarborough's view on Obama's personal style.

MICHAEL DYSON: I think what Mr. Nader is speaking about here is a matter of style. And here, Mr. Obama has been past brilliant. The reality is that you can't win for losing. If he was going [imitating] "you know what I'm sayin'? Look, look, what I want to talk about is the followin' stuff," if he had a kind of brogue, or a vernacular that is associated with African-American ghetto-speak, then he would be considered legitimate and his bona fides would be established, but if he speaks the king's English to the queen's taste, if he's able to put together subject, predicate and noun, if he's able to talk, and verb, if he's able to talk about the transitions in the American economy with aplomb and grace and style, all of a sudden he's, quote, "speaking white," not simply in terms of style but in terms of subject matter as well. He's trying to be President of the United States of America, not of any one segment of America.

Mika was more inclined to agree with Dyson.

My two cents: There's a delectable irony in seeing liberals turn on the same Nader they once extolled as the great champion of their causes.   Now he's become persona non grata for the crime of running against their guy. 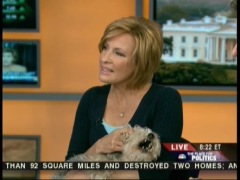 Later in the show, comedian Richard Belzer came on to tout a pet adoption project, Paws-i-dential Year, tied to the political season.  He brought along Bebe, a stray dog he had adopted.  Mika was cuddling the cur, when things suddenly went very wrong.  What's worse, Joe pledged to reward the little culprit with some steak for the outrage he committed.  Hat tip Blonde.