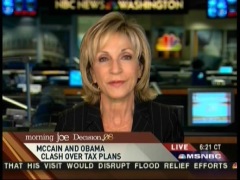 Update | 10 AM: McCain Campaign Comments to NB on Mitchell Remarks

IMing with a friend in England this morning, Morning Joe on in the background, I was vaguely aware that an Obama staffer was on, touting her candidate's economic plan. Signing off my chat, I focused on the tube, only to realize that the Obama staffer was in fact . . . Andrea Mitchell.

Mitchell cast the battle of the candidates' tax plans as McCain's "old-fashioned" supply-side economics versus Obama's "mainstream, centrist" plans that "do help people" while responsibly "paying for everything."

JOE SCARBOROUGH: Talk about just how different these two candidates's vision is for America's economic future.

ANDREA MITCHELL: They couldn't be more different. It is a classic contest between old-fashioned, Republican, supply-side economics—John McCain—and Barack Obama's melding of Clinton sort of growth economics, and also mainstream, centrist, Bob Rubin-style of economics. It's really interesting to see who he has around him. He has people who came out of the Hamilton Project, which is at Brookings--you can't get more Washingtonian than that. It is the Bob Rubin group.

SCARBOROUGH: Andrea, if you could, break that down for us, because we all know supply-siders believe: cut taxes, it grows the economy, and helps you get rid of the chickenweed in your backyard. Cutting taxes cures all ills. What is this Bob Rubin style of govern--this centrist style of economics? What is it in terms of policy?

MITCHELL: Well, what it means is helping people, doing things on health care. Government programs that do help people on health and education, but paying for everything. So it is the kind of responsible economics, some would say, that led to a lot of growth in the 90s because people on Wall Street were reassured you wouldn't be growing the deficit. So it's not going crazy on social programs without paying as you go, and it's also doing something to make the tax code fairer.

Mitchell did go on to observe that "McCain would say" taxes on capital gains and the wealthy hit the most productive segments of society. She added that both sides can point to economic eras that supported their arguments. Mitchell and Joe also agreed that a windfall profits tax on oil companies would do nothing to reduce gasoline prices. The "some would say" was also a nice touch.

But her touting of Obama's proposals was not framed as "Obama would say," as she did of McCain's critique. Mitchell left little doubt as to whose plans she prefers.

Update | 10 AM: McCain Campaign Comments to NB on Mitchell Remarks

Shortly after I posted this item, I had the chance to participate in a bloggers conference call with Frank Donatelli, deputy chairman of the McCain campaign. I took the opportunity to invite him to comment on Mitchell's remarks. Excerpts below.

FRANK DONATELLI: How you label these things, these economic plans, I think is something of a game. Everybody is looking for that three-word description that will get the media to write about it. I would simply prefer to say that McCain's is a time-honored, market-oriented approach which trusts people to do the right thing for themselves and gives them the resources to provide for them and their families, versus, if you want to talk about "old-fashioned," a pretty much soak-the-rich, New Deal, big government scheme that Senator Obama has put forward.

Note: After listening to my reading of Andrea's remarks, Donatelli's initial reaction was "I've got to really get with Andrea and explain to her the basics of economics." Now that would make for some great TV. Hopefully we'll have the chance to see it.