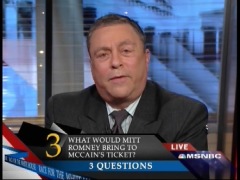 Blankley, also the former editorial page editor of the Washington Times and who continues to write a column there, made his remarks on MSNBC's "Race for the White House" this evening as part of a panel reacting to the news that McCain has invited the three governors—past and present—to meet with him over the Memorial Day weekend.

DAVID GREGORY: What would Governor Crist bring to McCain's ticket?

BLANKLEY: No. This would be a quirky choice, not a bold choice. I think McCain needs to play to his strength. He's playing as the experienced man. He should have an experienced ticket. Like Clinton picked Gore, similar kind of a person, to emphasize his strength. Jindals's a remarkable guy, he's very smart. And in the future he may well be a presidential candidate. But I think this time out, it would be a mistake for McCain to go with him.

BLANKLEY: I think McCain has got to put everything in getting someone who will help him get elected. Worry about governing if he's lucky to get elected. And Romney's problem is that he seems inauthentic. And that's inconsistent with the theme of McCain, which is the straightshooter. And also, his Mormonism isn't going to help him amongst conservatives, unfortunately. So I don't see him as an asset.

So who does Tony like? Said Blankley in his opening remarks: "I think this is such a weird election season that McCain needs to do something different, maybe go with someone like a Governor Ridge or even a Lieberman, rather than trying to do a sort of a classic carry-a-state deal."

Note that both Blankley's suggestions are pro-choice, whereas McCain has already effectively ruled out the possibility of a pro-choice running mate.

FWIW, of the three potential Veep picks, Gregory spoke most highly of Romney: "Tony, when I look at Mitt Romney, I see somebody who is potentially a very good administrator in a McCain administration. Somebody who helps him really govern, and shores up that weakness in McCain, whereas McCain is principled, and has values, and has a real sense of direction and leadership for the administration."