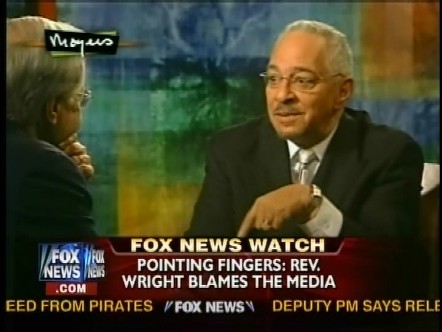 This week's Fox News Watch was a mix of the candid, the intriguing and the downright comical. Let's start with the humor. Well-intentioned liberal panel member Jane Hall, wringing her hands over the fact that the Wright matter has injected race into the campaign, got off this bit of unintentional comedy.

JANE HALL: Unfortunately, this is going to be what's going to be associated [with Obama]. I mean, it's like Willie Horton, except that Obama knew Reverend Wright,* and on Fox and other networks he is visually linked, it gives one more excuse to run this incendiary footage. I really regret that race, which Obama tried to transcend, is now going to become a very ugly subject in this race.

So it's unfair to pin this Wright stuff on Obama, except for the fact that, well, it's . . . fair. Moreover, whose fault is it that race has been injected into the race? If Obama were really the kind of person to transcend race, he wouldn't have been hanging around with Rev. Wright for 20 years.

As for the intriguing, Jim Pinkerton [making a welcome return to the show after his sojourn with the Huckabee campaign] passed this along.

JIM PINKERTON: There's another story, of course, which all of us in the cable news world are going to have to look forward to. I saw it on a blog called The Cable Game where it made the point that Reverend Wright, Jeremiah Wright, has an enormous stake in Obama losing. He's been saying for half a century that white people are terrible. And now, if Obama wins the election, then obviously America is not so bad. If Obama loses he says "see I told you."

Now that is some pretty Machiavellian stuff.

Finally, toward the top of the show, Juan Williams told an obvious but oft-denied truth.

JUAN WILLIAMS: Let me start with an assumption I am sure lots of people disagree with. Say there's a liberal lean to most of American media. Let's say they realize Barack Obama is in trouble this week after senator Clinton's win in Pennsylvania and they are doing a reassessment of senator Clinton and saying maybe there is something here. I think what has been overwhelmingly negative coverage . . . you are starting to see a shift and reassessment.

* For that matter, what was unfair about raising Willie Horton? By interesting coincidence it was Jim Pinkerton, working on the Bush campaign, who had noted Al Gore's use of Horton during the primary campaign and brought it to the attention of others, leading to the Bush ad.