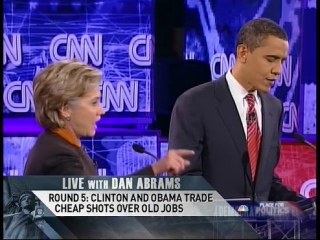 On the east and west coasts today, two liberal columnists unleashed a torrent of vitriol at Hillary and Bill Clinton. At the Los Angeles Times, contributing editor Jonathan Chait [a past master of political hatred] asked Is the right right on the Clintons? Consider these blistering excerpts [emphasis added]:
On the East Coast, it was New York Times columnist Bob Herbert's turn to unload on the Clinton couple. Excerpts:

Chait surmised that at the end of the day, "most of us will probably vote for her because the alternative is likely to be worse." But he also ominously asks, "what happens if she's embroiled in another scandal? Will liberals rally behind her, or will they remember the Democratic primary?"

What an amazing phenomenom. Has there every been a front-runner, a party's presumptive standard bearer, so feared and loathed by leading opinion makers in her own party as is Hillary Clinton? Whatever happened to that conventional wisdom about Democrats, in contrast with Republicans, being delighted with their field? Will Democrats actually nominate a woman about whom they have such fundamental misgivings?