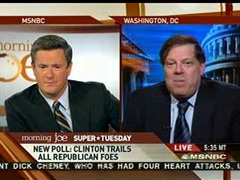 Presaging the kind of press control a President Hillary Clinton might try to impose, a member of her inner circle scolded Joe Scarborough today for having the audacity to mention a poll with results unfavorable to Clinton.

Yesterday, Zogby International released a new poll indicating that in a general election head-to-head match-up, Hillary Clinton would lose to all of the leading Republican contenders by a 3-5% margin. Even worse from the perspective of Clinton heading into the Dem primaries, the same poll shows Barack Obama beating each of the Republicans by 5-7%.

Chief Clinton strategist Mark Penn was a guest on "Morning Joe" during today's 7:30 ET half-hour. Nothing could be more natural than for Scarborough to raise these newsworthy results. But Penn wasn't pleased.

JOE SCARBOROUGH: Hillary Clinton, we've all said it here, and a lot of people have said, she's really run a flawless campaign. She got into some trouble two, three weeks ago and now suddenly we have polls coming out like the Zogby poll that you saw that everybody's talking about this morning that shows that she's losing to all of her Republican contenders, John McCain beating her 42-38%, Clinton losing to Giuli --

Penn could be heard laughing off-camera, and Joe picked up on it.

SCARBOROUGH: And by the way, if I were you, I'd be laughing too. These polls, schmolls. Romney 43-40%. My favorite is Huckabee beating her by five points. What's going on here?

MARK PENN: That was Zogby's first interactive, on-line poll ever. The Gallup poll that came out also yesterday showed Senator Clinton five points ahead of Giuliani and double digits ahead of some of the other possible Republican nominees, and showed that if Barack Obama were the nominee it would be dead even. That's a real poll. that's got 50 years of history. This is the first time Zogby has done something online. It's a meaningless poll, and really, frankly, shouldn't even be on your show.

Penn's comment was fundamentally misleading. While this might have been Zogby's first use in this election cycle of an online survey of the presidential head-to-head matchup, the firm has been successfully conducting online polls for some time. For example, in 2006, according to Zogby, its online polling division, Zogby Interactive:

Correctly identified the winners in 18 of 19 Senate races. And the only race that Zogby did not pick correctly – the McCaskill/Talent race in Missouri – was still well within the margin of error. Zogby Interactive had Talent winning re–election by a single percentage point, instead of losing by 2%.

As per the notes at the foot of yesterday's Zogby release, the margin of error in the current presidential poll is only 1%. This compares to the 3.1% margin of error in the July head-to-head matchup, conducted by phone, presumably reflecting the much greater number of participants in the online poll, 9-150, versus 1,012 in the earlier phone survey. In other words, if anything Zogby is saying that the current poll should be more accurate than its previous one.

Sure, it's the job of campaign aides to talk up the positive and discount the negative. But for those concerned with press freedom, there was something chilling about hearing a key Hillary insider tell a network host that a poll the Clinton camp didn't like "shouldn't be on your show."

Update | 10:25 AM. I contacted the Zogby firm seeking a reply to Penn's comments. Here is the response from Zogby Director of Communications Fritz Wenzel [emphasis added]:

Mark Penn is one of the best in the polling business, which is why he works for such high-level clients as Hillary Clinton. But he should know better than almost anyone that Zogby has long been doing online polls, and doing it with as much accuracy and success as anyone in the business. How should he know this? Because no political campaign requests copies of our polling results more often than Mark Penn's office.

As Newsbusters mentions, Zogby International's online polling division has nearly a decade of experience and is a leader in identifying a reliable and accurate methodology that matches the changes we see in how our society communicates. The vast majority of likely voters today uses the Internet to express their opinions. We are there to accurately capture those opinions.

Note: Zogby's Wenzel has posted an item about the incident at the firm's site:

Mark Penn: Buckling Under the Pressure of an Unfavorable Poll