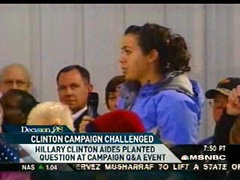 What did Hillary Clinton know about the planted question in Iowa and when did she know it?

The Clinton campaign and apparently Clinton herself are denying she had any idea she was calling on a plant. But according to information in the New York Times, Clinton campaign aides had in fact prompted her to call on the plant.

TAMRON HALL: Senator Clinton herself said she knew nothing about this and promised it would not happen again . . .

TOM VILSACK: Obviously Hillary Clinton does not condone the planting of questions; she did not know that this young person had been given that question.

Vilsack elaborated on his answer later in the interview. 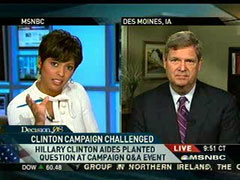 VILSACK: The senator has no idea in the hundreds, thousands of people that she's talking to who's talked to an aide and who hasn't. She basically just tries to look around the crowd and and tries to answer a half-a-dozen or a dozen questions at stops.

As can be seen from the exchange below, which occurred today at 2:21 PM ET between MSNBC anchor Contessa Brewer and NBC reporter Athena Jones, the Clinton campaign is also claiming that not only didn't Hillary know the question had been planted, Clinton hadn't been prompted to call on the plant.

CONTESSA BREWER: Did you see a signal to Hillary Clinton on who to choose?

ATHENA JONES: I did not, and I asked the campaign about that: did people point out to Hillary who she should ask? And they have insisted that she did not know this person had been prepped and she didn't know who she was calling on.

But this New York Times article by Patrick Healy suggests something very different.

Ms. Gallo-Chasanoff did not return phone messages over the weekend seeking comment. But the Grinnell College newspaper reported her as saying that the Clinton aide told her the campaign wanted a question from a college student, and that campaign staff members had prompted Mrs. Clinton to call on her.

So which is it? Did Hillary know of the planted question? Did Hillary's aides prompt her to call on the plant? Hillarty Clinton's credibility might hang on the answers.

My take: The Clinton campaign has admitted planting the question. Why would they bother if they weren't going to ensure that Hillary called on the plant?

Grinnell’s “Scarlet and Black” newspaper reported that a Nov. 6 event at a biodiesel plant student Muriel Gallo-Chasanoff was given a “canned” question to ask in front of the national press.

“One of the senior staffers told me what (to ask),” Gallo-Chasanoff told the paper, adding that staffers pointed her out to Clinton, who called on her after the speech.

Note: Hot Air draws a brilliant analogy to one of Bill's most famous fibs. See "Update" at foot.

CNN has uncovered evidence that Hillary answered at least one other planted question at the event [emphasis added].

In a statement, the campaign also added, "On this occasion a member of our staff did discuss a possible question about Senator Clinton's energy plan at a forum. ... This is not standard policy and will not be repeated again."

Gallo-Chasanoff may have some doubts about that one as well.

"After the event," she said, "I heard another man ... talking about the question he asked, and he said that the campaign had asked him to ask that question."

The man she references prefaced his question by saying that it probably didn't have anything to do with energy [note: the event's specified topic], and then posed the following: "I wonder what you propose to do to create jobs for the middle-class person, such as here in Newton where we lost Maytag."

A Maytag factory in Newton recently closed, forcing hundreds of people out of their jobs.