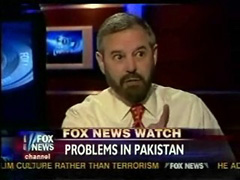 Should I be worried? I just agreed with something Neal Gabler said. On yesterday's Fox News Watch, the liberal media critic opined that the MSM is backing Benazir Bhutto over Pervez Musharraf in the current Pakistan crisis -- and not for the loftiest of motives.

And could Hillary fall prey to the scenario that brought down Michael Dukakis? 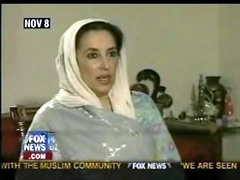 NEAL GABLER: The media has a horse in this race. Bhutto is their horse, because they're giving her so much coverage.

THOMAS: It's sugar over vegetables.

Jane Hall could be heard in the background uttering a disapproving "oh-h-h-h." 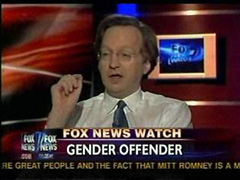 In an earlier segment, Newsday columnist Jim Pinkerton's fleeting allusion to the Willie Horton episode turned out to have a fascinating backstory. The reference arose in the course of a discussion of Hillary's evasiveness on the licenses-for-illegals issue.

PINKERTON: Chris Dodd, nailing Hillary on the driver's license issue, it's taken Hillary ten days to come up with an answer on that. I wrote that I think that the damage done to Hillary by Dodd by raising the driver's license issue, Democrats don't care, but independents and Republicans do. This reminds me a lot of the 1988 campaign, with the prison furlough issue, which ultimately mortally wounded Michael Dukakis.

Intrigued, I contacted Pinkerton to ask whether he was referring to the fact that in 1988, it had in fact been Al Gore, then a candidate for the Dem nomination, who had originally raised the prison furlough issue. But while the issue didn't gain traction during the Dem primaries, it exploded all over Dukakis in the general election.

Pinkerton responded, confirming that was exactly what he had in mind, then added this interesting historical footnote.

We Bush campaigners were entirely focused on the Republican primary race till we beat Dole in Illinois, on March 15, as I recall. After that, we did, indeed, start to wheel our guns around to the Democrats, although, of course, there were still a bunch [of Republicans still] in the race at that time.

During that time, [a campaign staffer was] reading the transcript of the NY Daily News debate. He . . . had no idea what Gore was talking about. Curious, [the staffer] called Andy Card [who told him] that the furlough issue had become a relatively big deal in Massachusetts, thanks to the Lawrence Eagle Tribune—and not at all to the Globe.

Around that time, too, an article on the furlough program appeared in Reader’s Digest. And the rest is history. [The staffer] can’t take any credit for the discovery of the issue. All [he] did was bring it in, as it were, shepherding it into the campaign, cueing it up for speeches and, of course, TV ads—- although our ad was the “revolving door,” ad, NOT the one with Willie Horton’s mug shot. That was an independent group.