Eight 9-11 Hijackers Were Registered to Vote: Will MSM 'Drive' Story? 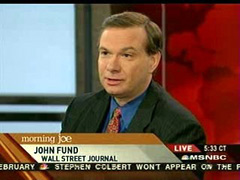 The fact has been out there for some time, but never garnered much media attention. Now, in the context of the current debate over the granting of driver's licenses to illegal immigrants, will there be renewed focus on this chilling reality? Could this be the factoid that changes a presidential election? As John Fund wrote in his Wall Street Journal column today and discussed during his "Morning Joe" appearance:

After 9/11, the Justice Department found that eight of the 19 hijackers were registered to vote.


And what made it so simple for them to register? As Fund explains:

[T]he National Voter Registration Act, commonly known as "Motor Voter," that President Bill Clinton signed into law in 1993. It required all states to offer voter registration to anyone getting a driver's license. One simply fills out a form and checks a box stating he is a citizen; he is then registered and in most states does not have to show any ID to vote.

The Fund column contains other mind-boggling details of the extent to which Eliot Spitzer, the New York governor whose drivers license plan Hillary Clinton supports, wanted to go:

Despite a tactical retreat this week--he says he will only give illegal immigrants a license that isn't valid for airplane travel and entering federal buildings--Mr. Spitzer has taken active steps to obliterate any distinctions between licenses given to citizens and non-citizens.

In a memo last Sept. 24, he ordered county clerks to remove the visa expiration date and "temporary visitor" stamp on licenses issued to non-citizens who are legally in the country. A Spitzer spokeswoman explained the change was made because the "temporary" label was "pejorative," given that some visitors might eventually stay in the U.S.

This is an issue that has the potential to change the course of a presidential election. How much coverage will the MSM devote to the story of those registered-to-vote hijackers?

JOHN FUND: New York State is one of the most liberal states in the country. 75% of people in New York oppose Governor Spitzer's plan to give illegal aliens driver's licenses. And there's a whole revolt among the county clerks. I quote in today's "Wall Street Journal," the Democratic clerk in Oneida County: "giving illegal aliens driver's licenses is an open invitation to voter fraud." Because once you get a driver's license you get a registration card with that. If you registers, you can vote, there's no identification [required], it's an open path.

JOE SCARBOROUGH: If you give driver's licenses to illegal immigrants, then in effect you're making it a lot easier for them to vote illegally in elections.

FUND: Well, there could be ways where you would prevent that from happening. If, for example, you required photo ID at the polls. But Governor Spitzer and Hillary Clinton oppose that, even though 80% of Americans want people to show photo ID at the polls. You show it for everything else. You have to show it to rent a video at Blockbuster. So there would be ways to prevent that, but under this current system, there literally is nothing to prevent someone from getting a driver's license, registering to vote, and then voting.

A bit later, in discussing the shady circumstances under which Republican Bob "B-2" Dornan in 1996 lost his California congressional seat to Dem Loretta Sanchez, Fund dropped the bombshell about the 9-11 hijackers.

FUND: Here's the thing. An immigration investigation by the federal government found 4,000 probable illegal voters in that race. It was decided by less than 1,000 votes. Eight of the 9-11 hijackers, eight of the 19 hijackers, were registered to vote -- because they'd gotten driver's licenses.