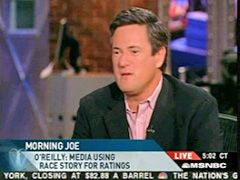 Joe Scarborough is still trying to wring mileage out of bashing Bill O'Reilly over his Sylvia's comments. After calling the "Factor" host a "moron" yesterday, the "Morning Joe" host was back at it today.

JOE SCARBOROUGH: How does Bill O'Reilly get away with this stuff? How does he get away with being shocked that people of color dress well and that people of color can run restaurants? It's 2007! This is the sort of stuff that people in the South did in 1962 and they brought water hoses down to straighten us out [wasn't it the "people in the South" who were using the water hoses on the "people of color"?] Those were the sort of attitudes that are destructive attitudes, and yet nobody is saying anything to speak of with Bill O'Reilly; he's getting away with it. Again, the contrast between Don Imus and Bill O'Reilly: stunning . . . Don Imus made a horrendous joke, which he was sorry for, and Bill O'Reilly has a world view that he feels no need to apologize for.

A bit later, Mika Brzezinski rose to the defense of Michelle Obama, who had said publicly that Barack needs to win the Iowa caucuses or it's over. Mika emitted a sympathetic "awww," then added "she's fine, she's fine . . . this is what happens to these poor candidates' wives, or husbands. One little thing they say gets completely run away with."

When it was time for the panelists to share their top item from the morning's newspaper crop, Mika chose this column by the Washington Post's Eugene Robinson, which excoriates the leading Dem candidates for their refusal at this week's debate to have set a hard-and-fast date for surrender in Iraq.

Joe then got all over the GOP candidates who declined to participate in yesterday's African-American oriented debate moderated by Tavis Smiley. Railed Scarborough: "It is a disgrace that these four Republican candidates that want to lead the free world, that want to bring the country together, refuse to go to forums that are run by people of color."

Mika and Willie Geist seconded the notion, Geist expressing [well-founded I have to say] skepticism at the "scheduling conflicts" the candidates cited. 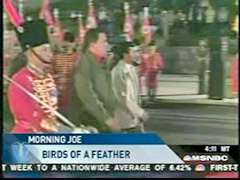 Aside: in other news, Mika reported that Mahmoud Ahmadinejad was in Venezuela to meet with fellow USA-hating crackpot Hugo Chavez. Note the uniform of the ceremonial guard accompanying them. Someone should check to see if a college marching band is missing its drum major ;-)
Foreign Policy Iran Venezuela Anti-Americanism MSNBC Washington Post Humor Mika Brzezinski Willie Geist Eugene Robinson