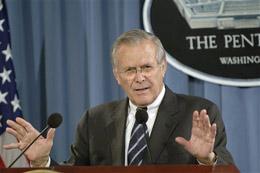 When NBC military affairs correspondent Jim Miklaszewski posed an ill-founded question to Donald Rumsfeld at a Pentagon press briefing today, the Secretary of Defense responded in, shall we say, animated fashion, leaving very little doubt as to where he stood on the matter.

The Mik apparently asserted that every time a security benchmark has been laid down, the Iraqis have failed to meet it.

We're told that after some brief treatment on the sidelines, Jim is doing well and fully expects to play in tomorrow's game ;-) 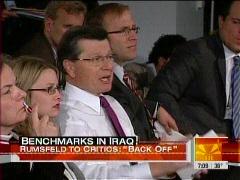 On Friday's 'Today, ' Mik was accorded considerable time to air his version of events. But while the NBC correspondent accused the Bush administration of being "hypersensitive" over the benchmark issue, at the end of his report Mik was constrained to acknowledge that "strictly by the numbers, Rumsfeld is correct."

Strictly speaking, I'd call that a concession.