Biden Blooper No Prob, But GOP Senator's Internet Description Will 'Haunt' Him 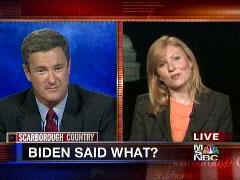 That's the world according to Wonkette-turned-Time columnist Ana Marie Cox, who appeared on last evening's Scarborough Country. For those who might have missed the Biden flap, on a recent campaign swing to New Hampshire, Biden told an Indian political activist: “You cannot go into a Dunkin Donuts or a 7-Eleven unless you have a slight Indian accent.”

NewsBuster Noel Sheppard has the video of Biden's blooper here.

Sounds like a career-stopper for a Republican. But Cox saw no real problem. Asked by Scarborough [who by the way described Biden as 'a guy that I like very much'], Cox opined that while other things might derail Biden's march to the White House, this wouldn't be it:

"I think there other reasons that Joe Biden might not be successful, but I‘m not sure if this is going to be it."

But when it came to Republican Senator Ted Stevens, Cox wasn't so forgiving. In explaining his vote on a so-called 'net neutrality' amendment, Stevens recently said:

"The internet is not something you just dump something on. It's not a truck. It's a series of tubes. And if you don't understand, those tubes can be filled and if they are filled, when you put your message in, it gets in line and it's going to be delayed by anyone that puts into that tube enormous amounts of material, enormous amounts of material."

Not prose for the ages, granted. But I don't think anyone believes Stevens was suggesting the internet is actually composed of tubes. Perhaps he had the notion of a pipeline in mind, a first-in-first-out protocol. In any case, certainly nothing offensive, other perhaps than to some San Francisco techno geeks.

Nevertheless, Cox was of the opinion that Stevens' remark was more likely to prove damaging than Biden's to their respective careers. Here's how Cox put it:

"I have to say that this particular gaffe [by Biden], I‘m not sure if it will actually haunt him in the same way, let‘s say, that Ted Stevens‘ explanation of the Internet as being a series of tubes earlier this week will haunt him."

You don't suppose the two senators' party affiliations might have figured into Ana Marie's calculus, do you?