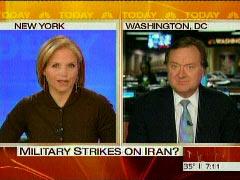 Reminds me of the old joke: "The food at that restaurant is absolutely terrible."

"Yeah - and the portions are so small!"

This morning's 'Today' simultaneously offered criticism of a potential attack on Iran while complaining we don't have the means to carry out such a strike.

UK Foreign Secretary Jack Straw was shown stating that the idea of a [tactical] nuclear strike on Iran "is completely nuts." NBC correspondent Andrea Mitchell reported the skepticism of military experts who say "air strikes could slow Iran's nuclear research but not end it. And Iran could retaliate militarily against Israel and launch terrorists against the US."

'Today' then played a clip of military expert Michael O'Hanlon asking skeptically "what happens next? Do you wind up in a longer lower-intensity conflict with Iran after it takes steps to attack us? That kind of an escalation dynamic could be demanding on our troops."

Mitchell then flipped the coin, stating "but with US troops in Iraq and Afghanistan, senior officials say they are reluctant to take on Iran. And, critics warn, the American people will not support another military engagement."

Even a certain French-looking junior Senator from the Bay State was shown, opining "there are many things we should do before we have exhausted the available avenues to us, and I think this military talk now is premature."

Interviewed by Katie Couric, Tim Russert stated "people I have talked to have said the war in Iraq is a major distraction, but they have to prepare for any eventuality. One of the biggest fears is that the current leadership in Iran, which is faced with a very strong reform movement and discontent within its own country, may find it in its interest to try to initiate something, to try to provoke something, a response from the United States, because that would unify the Iranians behind the existing theocracy."

That's when Katie had her damned-if-you-do-or-don't moment: "When it comes to planning for a possible military option, can the Bush administration afford to take this on? Obviously the military is stretched thin in Iraq and Afghanistan. From a PR point of view, do you think the American public is going to support this kind of planning even?"

Russert: "That's a huge question. And no less than John McCain said everything has to be on the table. But the idea of fighting two wars at once is obviously of grave concern to everybody."

"No less than John McCain"? Well, then, I guess the MSM has to take it seriously!

On a more serious note, the lack of balance in the Today report is surely due in part to NBC's various biases. Another factor, however, is that the report on the potential plans to attack Iran is the result of leaks. The administration is unwilling at this time even to acknowledge, much less specifically explain and defend, its planning As a result, you have a variety of 'experts' second-guessing matters without a counterweight from the administration. Thus the field is left open for a John Kerry to piously criticize the failure to exhaust other options, as if that's not exactly what the Bush administration is doing.

In any case, imagine a scenario in which Iran did launch a strike against the US or one of its allies. The same critics who today carp at the administration's itchy trigger finger would be condemning the lack of the very preparation that is apparently taking place.